What To Do With Old Laptops?

Here's a list of old laptops I had.
I currently have an Aluminum Powerbook G4 1Ghz that I've upgraded to 2GB and 100GB HD.  It's a workhorse that I've had 2004.  About four and a half years.  I have been thinking about upgrading for a while now and I think it's about time.
It's still doing pretty much all that I want it to do except for the fact that the screen is not as bright as it once was and the time and electricity I spent processing video (and I do a lot of it) just isn't not worth the trouble.
But the question is what should I do with the Powerbook or anyone else for that matter who has a laptop that still has some legs left but not quite enough to do today's work?
First the Sony Viao.  I gave it to my aunt but a friend of mine also has one as well.  I think mine is sitting somewhere in her draw or the garage.  The 12" screen might be a tad bit small for her eyes.  It was later I gave her an used HP laptop we used for our family business.
But my friend who also had a Viao 505 turned it into digital picture frame.  As a professional photographer, I'm not surprised the direction he went with his laptop.  If you have any questions on how he did that, please visit camerahacker for more information. 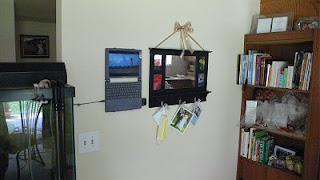 As you can see, it's quite brilliant.  Here are instructions on how you can mount your own laptop and turn it into a picture frame.  (Photo used with permission from Camera Hacker.)
Now, I've thought about it some more, I also gave my other Viao and the 1400 to the same friend.  The 1400 had an issue with the power supply but he fixed it.  I think his baby daughter is using it as a training wheel before she is ready to enter the Mac world when she is a bit older (Uncle Paul will see to that).
With the 2nd Viao (I bought my brother that when he went to college), he is using it as a Linux machine.
These are just some examples of I've done with my old laptops (not the giving away part) after they've become somewhat obsolete.
I have thought about using it as a public web machine for people who come over to my house.  I'm think I'm going to be a bit possessive about my new Macbook in the beginning.
I have also thought about hooking up a digital camcorder to it and use it as a server to monitor my backyard.  We have had a rash of break-ins in the neighborhood and I feel safer if I can keep an eye on my house when I'm away.
If there are any other ideas, I love to field them and maybe even post them for everyone else.
at June 10, 2008