If Onxo were to do a device of the week or device of the month, this would be it.  Meet the Archos 5 and 7.
This is what should be coming from Apple as far as media support goes but Archos beat them to it.  Clearly with the comparison to the iPod Touch on the website, Archos has it's sights set on the consumer.
What a lot of mobile warriors will want to know right away is the screen.  You get a choice of a 5" or a 7" touchscreen (800x480 pixels; iPod Touch has a 3.5" screen, 480x320 pixel).  Hence Archos 5 or 7 (A5, A7).  With such ideal sizes for mobile devices, what can it do?  Well, I'm going to tell you the highlights just to show you what is possible in such a small package.
When it comes the Internet, the pitch being offered against Apple's offering is "why zoom".  Archos uses Opera as its browser.  It also has a full e-mail client, widgets also courtesy of Opera, and Web TV and Radio are accessible because of Flash.
And it supports 3G if you want to stick a sim card in there. 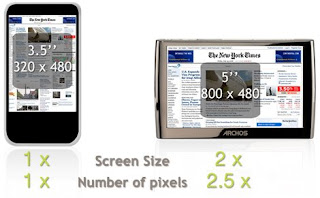 The A5 comes with a 60GB, 120GB, 250GB HD.  The A7 offers up to 320GB storage (or a smaller 160GB HD).  In the past, there have been a few folks who wanted to see an iPod with a bigger screen and uses a HD for storage.  Since Apple has not made public their fall iPod line-up, we won't know for at least six to eight more weeks (October). 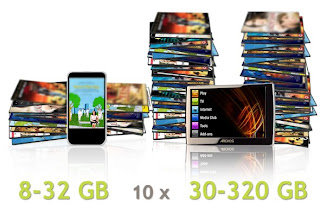 When it comes to promoting the TV features, it does not bother mentioning the iPod.
Make no mistake this is a purely entertainment mobile device.  Videos, pictures, musics, ability to receive video streams from a PC, and even games.
The battery life is a bit of a let down.  For such a device, you want something that can last a while longer.  A lot  longer in fact.  It beats the purpose of having such a large storage but without the battery life to access it.  The iPod Touch offers 5 hours of videos and 22 hours of audio while the A5 and A7 both offers only 4 hours of video and 12 hours of audio.
The A7 weighs in at 23 oz, 1.44 lbs while the A5 weighs in at 10.58 oz or .66 lb.  By comparison, the iPod Touch  weighs in at just 4.2 oz or .26 lb.
By comparison, the Nokia N810 offers a 4.1" scree (800x480), 2GB storage, camera, keyboard, and weights 7.97 oz, .5 lb.
While it's doubtful that Apple (or Zune) will have to worry too much from Archos but they both need to pay attention.  They can learn a thing or two from Archos who has been doing this longer than Apple or Microsoft.
Note:  I'm not giving up my iPhone.  As impressive as these Archos offerings are, they are not the mobile platforms Apple's mobile devices are.  I see the Archos 5 and 7 as media players with Internet features added.
Just the same, both of the models rock.
at August 19, 2008