Google: Android Failure Is Not An Option 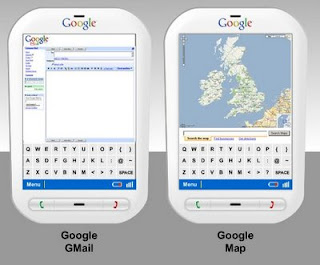 So, what if it does not work out the way Google and its partners envision it to be?  What will Google do then?
Perhaps, we might actually see the fabled gPhone that was making it way across the Internet even before the iPhone was released.  (See here for mockups)  After all, Google did say it would reserve the rights to develop and release its own phones.  That was always something that stuck with them.  For Google, there is a certain vision they have and they can't expect their partners to share every aspect of it.
In the end, Android will have a brighter future if the alliance thrives than having Google go at it alone.  And even if HTC and others abandoned Android and move onto Symbian or LiMo (two other open-source mobile platforms), it does not mean Android will be relegated a second class platform.  Google Search and its web apps has generated enough good-will for a gPhone to have a good shot at doing well on the market.
One issue that may plague Android, be it gPhone or a HTC phone, is software and developer support.  Accoring to Google, it is only 80% finished.  It may be running into issues with developers.  Recently, an e-mail mistakenly made public revealed Google released a newer version of the SDK to a limited  to 50 privileged developers who won the first round of the Android Challenge, certainly not the way most would chose to win support.  Furthermore, there have also been  rumblings of dissatisfaction.
Look at what Apple is doing with the App Store and the iPhone quality issues.  The mobile market is new to both companies and both are likely to stumble a bit here and there.  As mobile gadget lovers go, we hope the stumble does not become a fall that they cannot recover from.  The iPhone has received rave reviews from critics and owners despite the MobileMe issue.  I believe it is because MobileMe an added value to the iPhone and not necessary to fully take advantage of the iPhone.
For Google, they want Android to be more than just an OS for a smartphone.  It is meant to be what OS X means for the iPhone, a mobile platform.  And if it means Google release the "gPhone" to make their vision come true, then that is just what they have to do.

Life: Getting An Early Start Is Great But Don't Get Exhausted Before Work

I previously wrote a post on getting an early start to the day.  And in that time, I've also realized that there are only so much that I can do in that time.  One thing that I do want to emphasize is that you want to manage it in such a way that you don't get exhausted by the time you get to work or school. Before I get into some of the popular ones that I have come across over the years, there are a couple of things I want to get across.  First, whatever you do, just start doing it.  Get up early.  Yeah, tomorrow.  Start.  That's the key to everything.  In fact, isn't that the key to it all? Second, why are you doing this?  Getting up in the morning is great.  I mean it but I think it is important to find a purpose for what you're doing.  That can come later.  But what I mean is how getting up early in the morning fits into your overall day.  At some point, just think about it.  It can make your morning more effective.  And going back to the first point:  start

I wake up at an early hour.  I've been like that as a child.  As far back as I can remember because my brother and I used to wake up at six to watch morning cartoons on week and that sort of stuck for weekdays as well, regardless of whether it's carefree summer or school days.  It's one thing that I'm rather proud of. Even now, as my family sleeps, I would enjoy my first cup of coffee.  I'm on the tablet most of the time catching up on the day's news.  On weekend, the Los Angeles Times Sunday edition. I have been reading a few articles on what people should do in the morning and try to accomplish before work or school.  I try to do a quick work out, write a bit, read something besides sports news or indulge in social media, and plan for the day. There are plenty of articles out there like that.  And while it is a no-brainer that getting a head start is always good, will doing all this and more really turn us into the successful people we read about who als

Corona Virus and China: Please Give Us Good Lies So We Sleep Better At Night and the Stock Market Will Keep Going Up

The Take-Away:  We are comfortable with China's Lies and that's not good at all. Bloomberg asked a very good question about why the rash of warnings from companies over the continuing outbreak of the novel coronavirus (COVID-19) in China did not rattle the stock market as it did today with the major indices dropping more than 3%.  Here is why:  for years, China has trained everyone to "believe" their always on target economic numbers when just about everyone and their grandmother knows it's fudged.  And now, we are getting more "transparent" daily numbers of new virus infections out of China, people seem willing to believe that as long as it shows a peak and then a steady downward trend so that it reassures the financial markets that things are starting to get back to normal.   Of course, no one truly believes that deep in their hearts.  Markets are willing to believe the lies because it allows investors to go forth with certainty even if it is