Palm Is Alive and Kicking

August 20, 2008
Palm made it official by introducing the Treo Pro that was leaked all over the Web last week.  More like flash-flooded than leaked given the multiple sites reporting specs and pictures.

If you want to see it, you can visit palm for more information.  I'm here to talk about my old mobile platform.  I still use the Zire as a ebook reader and I use it to store information as a back up solution.  It works just as it should.  But I've moved on because of a slight buzzing noise that I'm cold is the capacitor. Okay.
So, what's to report. Pride.  I think Palm fans love the fact that Palm is still turning out great looking Treos even if Windows Mobile that's running things.
To coincide with the launch, NY Times reports on the folks running the show at palm and a bit of the dynamics as Palm would like us to see it.  It's an interesting read to acquaint yourself with the Palm again or for the first time.  As the drama unfolds all over the mobile front, we'll see if former Apple exec Jon Rubinstein will be able to bring some Apple magic over with him or if it's really just Jobs' reality distortion field all along.
I've included some simple but pertinent specs of the iPhone, Bold, and the Treo Pro.  But as far as the Palm brand, there is a lot of loyalty and excitement.
I wonder what kind of reception a version of the Palm Treo with Palm OS will get.  Let's face it, Palm isn't really Palm when its running Windows Mobile. 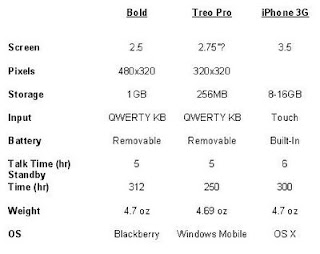