Six hundred and 20 minutes left until the G1 press event.

And the T-Mobile G1 site is up.  Visit to see for yourself. 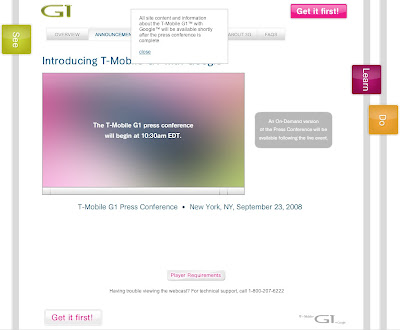 Starts 10:30am EST.  For once, it's cool living on the West Coast as far as waiting for announcements are concerned.

You can click on the buttons but I suppose they won't go live until tomorrow morning.  Well, it did say "All site content and information about the T-Mobile G1 With Google will be available shortly after the press conference is complete".

So, there you have it.  Could be a game changer.  Eventually.

Here are some last minute details to keep track of from these sites:

I've also started moving most Android posts over to On Android , another blog I started to talk about all things Android.
at September 22, 2008