September 15, 2008
Technology Review published by MIT is reporting on a new polymer reader that will go into product upon completion of a factory in Germany.  Eleven million units will be produced to offer a cheap  and flexible reader. 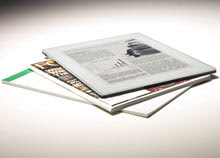 Plastic Logic, a Cambridge startup, will begin to market the product in January 2009.  So, how is this different from what we've seen on the market from the likes of Amazon's Kindle and Sony's ereader?  Well, this is a plastic reader.  It is mean to be flexible, large screened, and robust enough to handle the day-to-day wear-and-tear of most mobile warriors.  Of course, it will use the E-ink technology.


Here are some specs and features we know:

This is something we're keeping a track of.  a light flexible reader is something that is complete separate from other mobile platforms like the iPod Touch or a reader like Kindle.  It's like such a device would compete with Kindle resulting in faster adoption of polymer screens and lower entry prices.


Furthermore, the polymer may result in better battery life.  Of course, we won't know that until more information is presented.  So, stay tuned.  We're very excited they're going into production.


Also consider the Readius, another flexible reader with 3G connectivity. 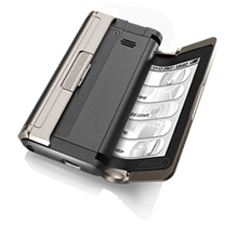 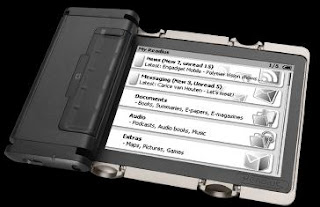 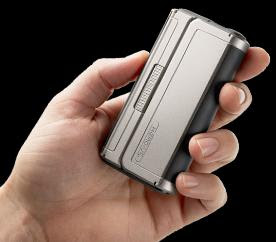 The readius is very limited in what it can do.  It is purely a reader.  It is very small when rolled up and that may be its selling point at the moment.  With its Internet connectivity, it can access ebooks, RSS feeds, and e-mails.  It also supports audio as well.  It boasts up to 30 hours of reading.  Input is limited to 5 buttons where as the Kindle and the forthcoming reader from Plastic Logic offers full keyboard input.
I can tell you the e-reading industry is all over the place and no one, including the overpaid analysts, know where the market is headed.  We know it'll grow but that's about it.  If anyone tells you otherwise, they're lying.
It was hoped that Kindle will bring a new age to e-reading but, so far, Bezo isn't making hay about its numbers the way Steve Jobs like to do with iPhone and iPod touch sale figures.  Regardless, I still hold out hope that things will change.
iPhone iPod kindle mobile reader wireless