As you may know by now, Google came out with their own browser, Chrome.  What you may not know it likes to display your history for all to see.  This could be particular trouble some if you want to keep your data private. 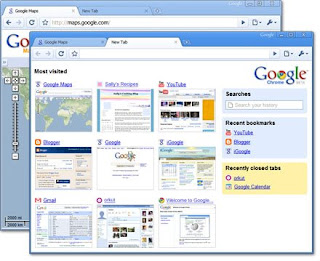 But there is a feature that allows you to go dark on your computer.  It's called "incognito".  The keyboard shortcut is Control+Shift+N.  Oh, I just did it.  Simple.  Remember that one.  Now, it stops recording history on your PC but where you go in the Web is still tracked and recorded.  That's life for you.

Here is a list of Chrome shortcuts from WebUpon.  Use your new powers wisely.

Chrome is only available for Windows.  Linux and Mac versions are forthcoming.  Google said its embarrassed about it.  I think its about going after Redmond first.

Second best Chrome shortcut is control+tab.  Try it.  It works on other browsers too.