Mobility Changes How We Stay Updated with Sports

Sports involve action, sweat, intensity, and the roars of fans.  That means sound and video.  So far, this is not available to the majority of mobile devices.  I've tried keeping up with scores on my old Samsung Trace and it just is not the same.

Obviously, unless you've got them of them fancy gizmos that does TV and make phone calls, you're relegated to keeping up with your favorite team or sports through Internet-enabled apps. 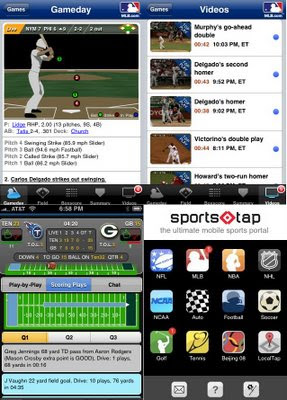 The screen shots of these iPhone apps almost provide a video game feel to it.  I've not provided screen shots for other platforms because iPhone for the moment provides the rich apps in mobility.  That'll likely to change, I'm sure.

But with charts, videos, sounds, and updated blogs with social networking, it can't get any better than to use your mobile device to connect with your favorit teams and fans.  I decided to bring this up because I'm not able to keep with all the games on Saturdays and Sundays.  But with the iPhone (hopefully the gPhone in a couple of weeks), I'll be happy to have highlights, play-by-play updates, and commentaries from fans.

I did not follow baseball on my mobile device even though it was easy to do.  The drama just isn't there for me this year.  I'm sure I'll start once the Fall Classics start.  But I really like to see someone from the teams interact with fans during games.  Maybe a designated blogger who can provide news and drama from the sidelines as the game progresses.  Heck, maybe a benchwarmer or two can chat with fans as well.  That'll be neat.

Regardless, rich media apps are making fans very happy who cannot be at games or watch it on TV.  Of course, some games can be downloaded like on iTunes.  But if you're stuck somewhere with Internet access but not a radio or television, a mobile app that provides constant updates will help you feel close to the game.

And speaking of radio.  It would be nice (even for a fee) to be able to listen to games through the app.
on September 11, 2008