Quick Musings - XOHM Is Live and MOTO with Android

That's right.  I got a notice today in my mailbox.  What's it mean?  Well, another competitor of the 4G kind.   Intel, Google, and Clearwire have been agonizing, pouring $$$, and trying to get this to take off.

While it's success is far from certain, after all it's late and in only one city, we can expect an exciting 2009.  There was a rumor-suggestion that Google will or should gobble up Sprint.  There are issues that ATT has with Sprint's desire to take over Clearwire and that has yet to be resolved.  It could merely be a delay tactic until ATT and Verizon's shared LTE network is ready, whenever that is. 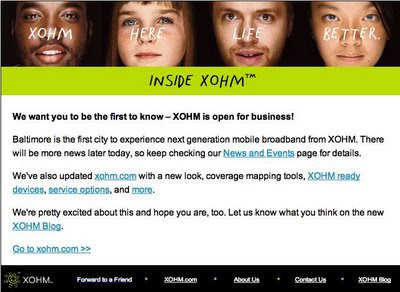 Please visit XOHM for more information.  DC and Chicago are let to go live next.  LA...geez...we're usually last.  Dallas, Fortworths, Providence, Philadelphia are in the works.

And the second note:  Nokia and Motorola are looking into Android?

Channel Web is reporting Motorola is looking at Android as their last best hope for revival in the handheld market.  Just how seriously is Moto looking into this?  350 engineers, give a take or two.

Macnn reports there are currently 50 engineers but that number could swell to 350 folks if this takes off.  Moto uses Linux and Symbian in their devices at the moment.  Also, Windows Mobile is featured prominently in the Q line-up.

Macnn added Nokia, the sole protector of Symbian, could be looking to test Android water.  I find this to be suspect as any word of this gettting out could spell doom for its now open-sourced platform, not to mention the devastation to the millions who have dedicated themselves to Symbian devices.

I think this is likely more of Android propaganda than anything.  Having said that, Nokia currently runs Linux on their N800 series and was rumored to be in talks with Microsoft to use Windows Mobile.  So, any Android talk, while extremely remote, is not out of the realm of possibility.

Personally, I hope this is not true about Nokia's Android plans if there are any.  Competition is great and it is what mobile warriors want most of all.  Competition, innovation, and different platforms to choose from.