Now, that we've had time to digest Nintendo's latest revision of a tired device, let's see how long Nintendo gives folks time to get used to it before moving on to DS 2. 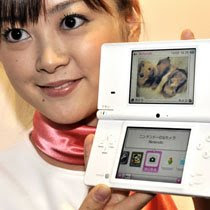 It's understandable the rest of the world would not get DSi for a while.  There are logistical issues that needs to be worked out - game (app) stores and maybe licensing issues to work out.  Outside of Apple, Nintendo is one of the few companies that likes to do things at their own pace and in their own ways.  However, with PSP, well, literally not going away, DSi is Nintendo's weapon to solidify its home turf.

However, the question for mobile gamers is whether improved Web experience, SD card, MP3, ability to take pics, and a few gimmicky ties to Wii enough to make folks want to buy into this.

Also new is an online store for people to download games.  I'm very curious how a Japanese-centric target can be translated to the rest of the world.  (With most games likely to be in Japanese, now is as good as any to start learning it.)

I can't help but think there are merely placeholders until Nintendo unveils out the real mobile and gaming convergence and a device that holds true to Nintendo's vision of a wireless gaming device next year.

My recommendation:  pass on the DSi.  $179 is pretty steep for something that's 4-5 years old.  There are some legs left but if you want true wireless gaming experiences that only Nintendo can bring, you'll have to be patient.

Here are some predictions I think may happen:


Note:  This DSi release reminds me of Apple's iPhone launch when Jobs convinced the world that it was cool to develop just on Safari while it is laying the groundwork for true app developments.

Note:  Here is a comparison shot of what the two screens look like from Nintendo's Japanese site.  Judge for youself.  Obviously, it's always nice to have bigger screens. 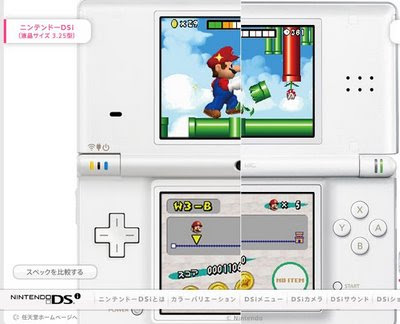