Fring on the iPhone

October 03, 2008
I downloaded Fring this afternoon and I could not wait to test it.  Since Fring works only with Wi-Fi and we don't use it at work, I had to wait until I get home.  I've been testing this out since about 8 or so. 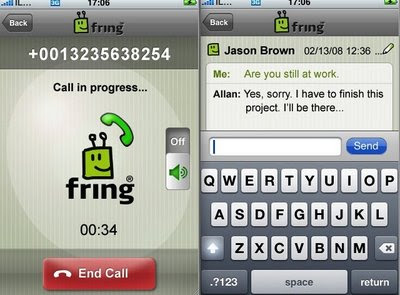 So far, this is what we've used Fring for and the results:


So there you have it.  I definitely recommend Fring now and just in case Apple does a two-face, get it before it's yanked! However, I do not think that's likely to happen.  Let's just say it is something of a road map I think Apple is following.
For that analysis, another time.  Here is the direct link.  And it'll only get better with time.  By far, one of the better IM/VOIP app (the only VOIP app so far).
Definitely recommended.
3G App Store Apple Edge Fring iPhone iPod mobile wireless