Two big news today.  First, pre-order for the first ever Android phone is now back on after supposedly selling out last week.  Delivery for this new batch of G1 will be for November 10.  (Boy Genius Report)

Now, by now, you should know that Steve Jobs nearly had a heart attack after hearing that he had a massive heart attack.  This report was all over the Internet courtesy of CNN's iReport.  Apparently some citizen reporter's "reliable" source told him so.

Like him or not, Jobs is fine.  Here's proof: 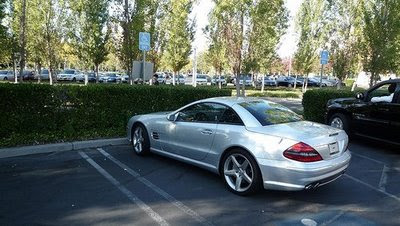 Actually, it's not.  It's an image from Cult of Mac.  I'm sure the car's there now though...should someone falsely reporting the death of another be attempted murder?  Sorry, it's Friday.  Forgive me.