T-Mobile has graced us with an emulator and a 3D guide to the G1. 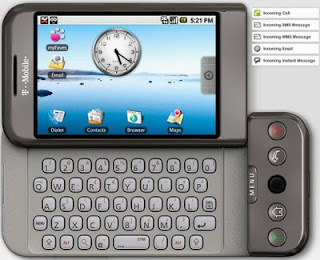 A new perspective really as you can click on a few features and see what the interface looks like.  I have to say so far, there is nothing special about Android but it's the potential and promise of a mobile platform.  Perhaps, I'll change my mind once my G1 gets here.

Based on what I've seen, Nokia, Microsoft, and RIM has nothing to worry about except maybe the buzz generated because of Android's association with Google.  Certainly, I can say with certainty Apple's iPhone will remain king for a bit longer.  Besides, I don't think G1 is meant to be an iPhone killer anyway.

Now, back to Android.  I've posted some screen captures and links to the emulator at On Android.  I've included some Android news bit and new pre-order information.
at October 04, 2008