We already know President-Elect Barack Obama is just as tech savy as the average mobile user. He's got a Macbook and an iPod. Sorry, not a Zune. He had a Blackberry but the Secret Service likely made him give it up. Yes, Apple fans. Even if he used an iPhone, he still would have to give it up in the name of national security.
What makes Obama a different mobile warrior than the rest of us are his rides. Air Force One. Okay, maybe a couple of you readers out there might own a jet or two. But nothing like the AF One.
Now his limo. On the day he takes office, Jan 20th, he will be riding in a brand new limo the Secret Service had it custom made by GM for the forty-fourth President of the United States. 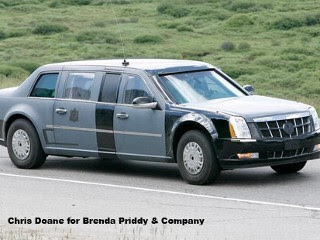 I first saw it last night on CNN but now ABC News is also having a go at the new armored Presidential ride.
I'm sure it'll have some sort tech we might be familiar with. Of course, I'm just speculating but giving how this President likes technology and how much his Presidential campaign and transition period relied on the Internet, there are likely a couple of gadgets in there we can expect to see. Well, it's what I like to have in the limo if I was the President of the United States.
Source: ABC NEWS
If you were President, how would you like to outfit your limo?
at January 07, 2009