More than Just 100Gbps, Korea Looks To Up Wireless Internet Too

February 02, 2009
Yesterday, we wrote about Korea's plan to increase broadband access to 1Gbps by 2012.  That was no the whole story.  Korea will be upgrading their wireless network to increase mobile Internet access from 1Mbps to 10Mbps.  Just like brandband access,  mobile access will increase ten times.

So, here are the highlights of what the Korean government, with the political will, is willing to do: 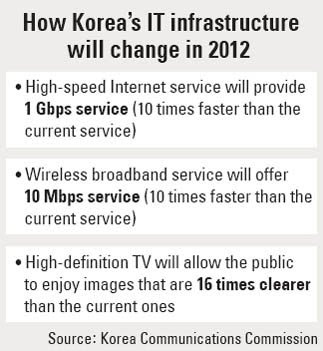 Okay, so we better get cooking here in the US.  Heck, this goes for folks everywhere else in the world.  Mobility is the future.  IPTV, VOIP, or just mobile Internet, more and more folks are relying on the mobile devices to be more productive, stay in touch, and be untethered from their cubicles.

In the US, the House passed their version of stimulus pack while the Senate is expected to take up their own version of the stimulus this week.  We're not even close to getting this thing done.  There is money for telecom infrastructure but we won't know until the Senate pass their bill and reconcile their version with the House bill.  After House and Senate finalize the bill, it will go to the President for his signature.