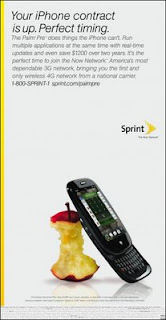 War!  Alright!  Pre versus the iPhone.  And you know what that means?  We mobile warriors win at the end of the time.  Don't think that competition doesn't have to do with the iPhone 3G going down to $99.  If not for competition, I doubt Apple will be offering the 3G version when they can very well push the 3GS.

Hey, Blackberry fans, you feeling left out?  I don't understand why Sprint decides you're nobody since RIM just sold 8.1 million Blackberries.  Windows Mobile folks, c'mon.  Let's hear from you as well.  It's war!
Lots of questions to be answered in the coming days.  Can Apple afford to stay stubborn and not allow folks the freedom of multi-tasking in the name of preserving battery life?  After all, can't Apple simply allow users to turn on or off multi-tasking?  This is the main point that Sprint and Palm is holding up as the advantage over the iPhone (again, neverminding the battery life).
If anything, Blackberry and Windows Mobile folks have more to worry about than the Apple camp.  The Pre, while does some things better than the iPhone (I am in love with Synergy), is still no iPhone killer.  And it offers a lot of opportunities for other mobile platforms to claim that mantel.  In all honestly, who really cares if there is an iPhone killer or not.  The iPhone doesn't dominate the market and dominating the 99% of the media doesn't actually translate into 99% of all sales.
I have to wonder about the thinking behind this ad.   It is stupid of Sprint to take such a direct jab at Steve Jobs and company.  Maybe they didn't hear but Jobs got a new liver.  A new lease on life.  Time to reflect.  And Steve's got $30 billion in the bank to really put a hurt on anyone who dares to do this kind of thing.  This is corporate mobstermanship here.  It's totally legal to bury the competition with money.
In six month's time, Apple can drop the iPhone 3G down to $50 and the whole market will get rearranged again.
But again, I'm loving this.  The WebOS is a very compelling implementation and I'm looking for others to follow.  As for pricing, that's sure to have the hardware makers going back to their bean counters trying to figure out just how much lower they can go to preserve their margins.  At the end of the day, Apple, Google, Microsoft, Palm, and RIM fans win with new innovative devices and lower prices.
I am so glad there is room in the mobile market for so many players.  Sorry, I left out Nokia, didn't I?
As with each platform, it has its own strengths and weaknesses.  Smart-ass campaigns aside, I think mobile users (especially those who read Onxo, On Apple, and On Android) are smart folks and should not be taken for granted.  We want easy mobile computing and data with the swipe of a finger.  We want to play games.  We want to listen music and watch videos on bright and sharp screens.  We want unrestricted use of mobile Internet connection.  We want apps that are walled by the hardware maker's warped and self-serving perception of mobile Eden.  We want longer battery life and slick designs.
Keep those principles in mind and no matter what platform, it will have a nice segment of the mobile market all to itself.  So, keep warring!
Source:  PreThinking, Engadget