When Apple offered the original iPhone, there was no app store.  There were no apps to speak of other than those offered by Apple and selected partners.  But we always knew that apps were coming.  Instead of coming clean, Jobs told the masses that the apps were available via Safari.


Simply develop for iPhone via Safari and that was it.  And in deed, many mobile developers did just that.  Webapps continue to make their way onto Apple's directory for weapps.  And maybe that's a good thing for iPhone users.


One of the things that's noticeably absent from the iPhone is seemingly cool accessible social and contact webapps that Pre users love. Apple has not provided an answer to HTC's Sense or Motorola's MOTOBLUR in offer cool looking widgets for offering quick access to social sites like Facebook and microblogs like Twitter.  In fact, I'm not sure the developers for Android that offer products in this category are happy about being supplemented by the phone developers.  But that's another issue.


However, I think I've figured out what Apple may be offering that will seem more innovative than anything offered on the market to date.  And it won't be anything new at all.  It'll just seem new because it's from Apple and Steve Jobs will sell it to us as something... well, you know...his reality distortion field will be on full-power.


So what will it be?  Dashboard.  Ah, I see those familiar with the Mac and Mac OS that has Dashboard know exactly what I'm talking about.  Basically, Dashboard is Apple's answer to micro-applications that are small, faster, and simple that ran under an environment like Yahoo's Widgets or the sidebars we started seeing in great numbers in Vista and Windows 7. 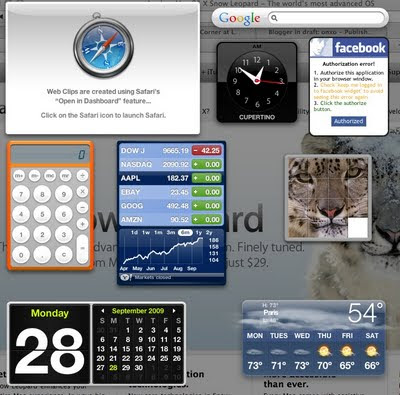 To access widgets in Dashboard in OS X, you can assign a hotkey or drag your mouse pointer to a corner in your Mac or Macbook and the widgets would appear.

Why do I think this is where Apple is headed?  First, it is an easy implementation for Apple's iPhone team because it is an existing feature.  How will it work?  That's up to Apple of course.  But in my limited experience with user interface, perhaps there is an icon for Dashboard.  Or Apple can start the iPhone in Dashboard mode and allow users to switch to the current classic format we've got today.  A third method of implementation is that uses can tap on a corner or swipe with a gesture to implement Dashboard.  Once Dashboard is activated, the screen is replaced with widgets added by users.  The user can swipe between windows for access to their widgets just like they do now with their apps.

The second reason I think Apple will offer Dashboard for the iPhone is obvious for Apple.  There are already widgets for the OS X that can be migrated over to the iPhone.  The fruit of hundreds of developers already exist and some may even work on the iPhone without much change.  For those that needs to be modified to work on the iPhone, I'm sure Apple will make it worth their while to made the changes as painlessly as possible.

Here are examples of what Yahoo and Microsoft offers. 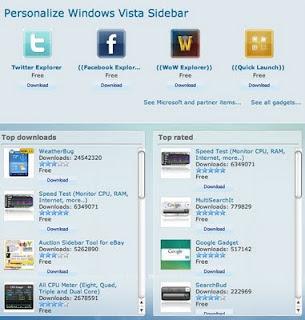 For the record, these are just what I think Apple will likely offer and merely my thoughts on this issue.  Not based on rumors or secret moles from deep within Cuptertino.  Because while I wish I have sources, I don't.
It has been noted via Wiki that there was a demo showing that is it possible to install widgets on jail-broken iPhones and that an update to the iPhone SDK allow for creation of widgets.  Perhaps Apple is waiting for more robust Web standards like HTML 5 is approved and the next version of Webkit (the framework on which Apple's browser, Safari, Google's Chrome, and Android browser) with HTML 5 support is shipped.  The new Web standard will offer richer Web experiences currently only possible through plug-ins like Flash.
More about Apple's Dashboard at Wiki.  Apple's own Dashboard on the OS X page seems to be missing.
on September 28, 2009