Free Wi-Fi At Airports Courtesy of Some Rich Tech Companies

November 10, 2009
Free is good.  And even better is free Wi-Fi.  That's right.  This Holiday Season, Google will be offering free wireless Internet access via Wi-Fi

This will bring a whole lot of goodwill for Google as delays and other airport-related issues are likely to crop up.  So from now until January 11, 2010, you'll have wireless Internet access with your smartphones, mobile devices, and laptops.  And for Seattle and Burbank, your free Wi-Fi will remain free forever!

Why is Google doing this?  Love?  Because they want mobile warriors to get used to the fact that wireless access is here to stay and that we better get used to it!  Well, sort of.  I'm sure they have bigger mobile plans in mind and this is just a started.

In their press release, they're doing this because they know things'll go bad at the airport so this is to help folks stay connected and pass the time.  Here are some details upfront: 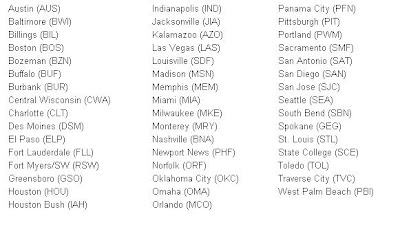 Not to be outdone, Yahoo is offering free Wi-Fi for Time Square starting today.  And for a whole year!  And where is Redmond is all this?  Well, Redmond is working with JiWire to provide free Wi-Fi for folks who use Bing.  Not a bad deal since I already use Bing from time to time.

Oh, and Macworld mentioned a few airports missing from the list that I thought would have jumped at this opportunity - LAX, SFO, and JFK quickly comes to mind.  Some wireless airport outfits charge $10 for a mere 20 minutes of access.  The shame.

One more thing.  Toyota also offers solar-powered Wi-Fi as a part of their Prius promotion using solar trees. You've got to see it.