December 15, 2009
Microsoft released an app that allows iPhone users to use Bing, bring the three major search engines to Apple's mobile platform.  Boy, this is awkward, eh?  I want to be in the room when his guys came to his office and told him that they have to make an app for the iPhone and it'll be Bing.
Well, it means the mobile search war is now engaged.  Google, by default, is running the mobile search show as it resides on nearly ever major platform.  Not counting Android devices, Google is the default search engine on the iPhone's mobile Safari.  Including those with iPod Touch, 80 million iPhone and iPod Touch users rely on Google for their searches.
I'm not sure Bing coming to the iPhone is a big deal at the moment but it does mean that Yahoo and Google cannot take the iPhone platform for granted.  And I'm sure we'll see Bing on other platforms in short order.  And for mobile users, this is fantastic.
Personally, I deleted Google's app months ago.  It was static and it doesn't offer me anything more than what I can get on Safari.  Yahoo's app was more engaging, offering social networks, news, and mail.  With Yahoo, you feel like you've got the whole portal experience on an app.
And what of Bing?  At the home page, you get a very nice interface that reminded me of Pre's own looks.  It was uncanny.  At the top is the search field and at the bottom are options for news, maps, movies, images, businesses, and directions. 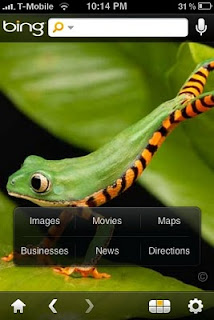 As you can see from the image, this isn't a simple mobile Bing search wrapped an app. The following are more images of searching.  I think the image search is awesome. 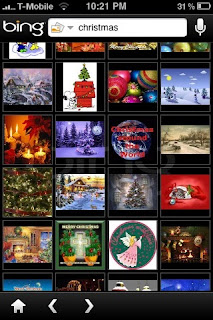 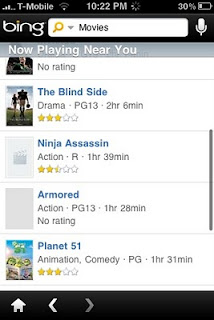 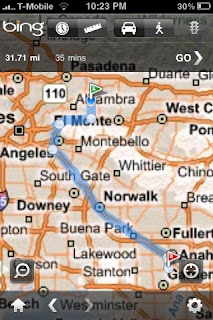 It's promising and Microsoft really can design a good app if it really wants to.  Imagine what's coming for Windows Mobile 7 if Microsoft can do this for the iPhone.  Google, time to step it, man.
Now, the question is whether Bing will be on Android.

Note:  Keep an eye on this.  Google's the new boogy-man as far as old guard techs are concerned.  Don't be surprised seeing Microsoft and Apple cozy up a bit on certain fronts.  I'm serious about this.
bing Google iPhone Yahoo