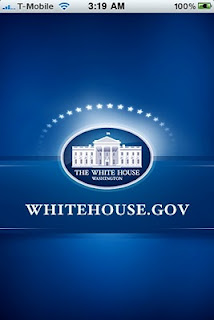 The Democrats just lost Massachusetts Senate seat held by the late Lion of the Senate and brother of President John F. Kennedy, Edward Kennedy, for the last 49 years.  Still, live goes on and the White House and the Obama Administration continues do the work the American people voted them in to do.

Regardless of what happens with healthcare, banking reforms, or the pending environmental legislation now that the Democrats lost their filibuster-proof 60th seat in the Senate, governing still must be done.

Now, the US government has entered what I like to call "government mobile" with the release of the White House app for the iPhone.  With the iPhone app, users will be able to watch President Barack Obama's State of the Union speech.

Perhaps one day, we'll be able to vote, bitch, write our Congressman or Congresswoman, and participate in a public forum all on our mobile devices.

The White House app is a good start.  The White House will also be launching a mobile site that any mobile device will be able to access.  I like to see Congress and other government entities do the same as well.

Note:  Would it have been funny had Apple rejected the White House's app on some kind of technicality?

Another Note: The State of the Union address is Wednesday, January 27th. 6PM PST, 9PM EST.