What To Expect At Apple's Media Event On Wednesday

Unless you're still hungover from Google's Nexus One unveiling and CES, you ought to know that Apple will be holding a media event to unveil their next creation on January 27th in San Francisco.  Presumably, Apple will introduce the iTablet/iSlate/iPad. 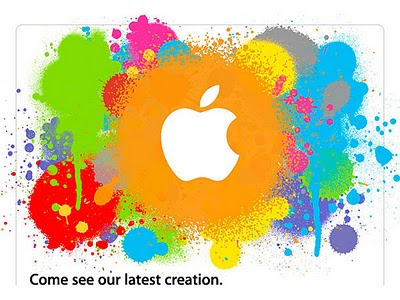 Also presumably, Steve Jobs will walk into the stage to great fanfare.  After all, it'll be one of the rare public sightings of this Silicon Valley legend.  And it's likely one of the last.  I'm in the camp that Steve Jobs will handle less and less of these public events and other Apple duties and turn them over to his trusted lieutenants.

Steve will reiterate much of the facts from Monday's call with financial analysts.  Millions of iPhones sold.  Millions of iPods that were put in Christmas stockings.  The success of the iMac line.  Another billion or two of apps downloaded.  Great success across the board.

Then Steve will go onto the main event.  Oh, he might refresh the Macbook lines.  There's talk that the Air might be delayed but no one will care since that's not why millions of fans are hitting the refresh button on their browsers for the latest from the live bloggers.

Oh, Apple's stock will go up and down based on what Steve has to say.

Then the real event starts.  He'll talk about the crappy ereaders on the market.  Everyone, including Kindle owners will see that Steve's right (after all, the reality distortion field will be turned up big time).  He might take a swipe or two at Microsoft.  That always gets the crowd rolling.  Then maybe even subtle jab at Google.

The crowd is dazzled.  It goes wild because it defies expectation.  How do I know this will happen?  Because it's Jobs.  Because this is Apple.

All the weeks of speculations and rumors - some true, some not.  Some are misinformation from competitors.  Some are misdirections from Apple itself.  I'm not going to get into what they are or aren't because I have no idea myself.

Then there will be demos.  News Corp will have a big showing, given all the leaks that Apple directed through WSJ and Foxnews.  Demos from publishers will help solidify the iTablet's role in print and ebooks.  If there is any kind of a new video business model to be showcased, Rober Iger will make the trek from Burbankand stroll onto the stage to say how happy they are to be a part of another Apple revolution (Steve sold Pixar to Disney in January of 2006 and is now the single biggest shareholder in Disney at 7% of Disney equity).

We'll also get demos from the video game studios.  Apparently, Apple will be pushing the iTablet as a gaming machine given the number of video game blogs that received invitations to this event.

It's also possible Apple will parade heavy weights from other markets like medical and education to demonstrate how the iTablet will also change their industries.

90 Minutes later, Steve Jobs thanks everyone for coming and the US economy will have lost billions in productivity because for that 90 minutes and the rest of the day, folks will be clamoring to know more about the iTablet and how it'll fit into their lives.

Also later Wednesday night, keep an eye on the Apple-centric blogs because they'll have information on how to watch the event via a Quicktime stream, courtesy of Apple itself.

What I don't expect to see.  I don't expect "...one more thing...".  There's chatter about iPhone 4.0 making a presence.  There's also talk that Apple will have something to say about iPhone availability on Verizon Wireless's network (personally, I'm holding out for T-Mobile).  Based on past Apple events and its singular focus, that's not going to happen.  The iPhone is kicking ass despite Android's best efforts and the Droid campaign.  Apple will not be in a hurry to rush things out.  I fully expect their annual iPhone product cycle to be maintained.  Of course, as a fan, I hope I'm wrong.
at January 23, 2010