June 21, 2010
I am now considering getting a Nook for myself.  I have already bought two for members of my family and I do have an iPad but the Nook as a dedicated reader is an entirely different beast.  I also want to disclose that in addition to buying ebooks from Barnes and Noble and Apple, I've also bought books in the past from Amazon. 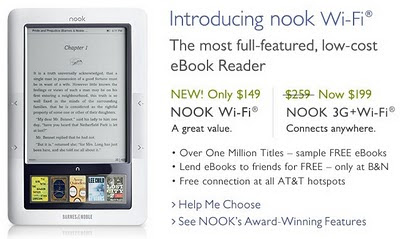 But with this move by BN and as a support of Apple, I'm likely to leave Amazon's Kindle behind.  The giant bookstore has updated the Nook by lowering its price from $259 to $199 and released a newer Wi-Fi only version for $159.  This is a similar move like Apple's iPad line - Wi-Fi only and another version with 3G wireless connection (BN's Nook can only use the 3G to download books, no true 3G Internet access).

We'll likely see Amazon make a similar move in the months if not weeks ahead.  As a matter of fact, I fully anticipate Bezos and company to update the Kindle.  In recent weeks, Amazon's digital book plans has faced revolt from publishers to shift to the agency model as well as competition from the iPad.

Isn't competition grand?  How will this impact users?  A first-rate ereader at $159.  First, we have Amazon to thank for this.  With the Kindle, and Steve Jobs has said as much, Amazon has done a great job in bringing ereading to the forefront of the general public.  And while the original price of $400 of the first Kindle was steep, there were adopters.

Competition with the entry of BN and, more recently, Apple has heated up the ebook market.  As a result, we are seeing great readers for affordable prices.  There is simply no way anyone could have anticipated readers at $159 in 2010 before the Kindle was released.  Then the Sony Reader was over $500 and ebooks were more expensive than their print counterpart.

I've been an ebook reader since the Palm V and Zire days with the eReader.com app.  I've read dozens of books, paying a premium at times, and I cannot be happier than what BN is doing today.  Now, we await Amazon's response.  Many bloggers as well as analysts think Amazon will respond with an updated Kindle.  Furthermore, Amazon is likely developing fully mobile computing solution for the Kindle.  Yes, a Kindle that is more likely a tablet than just a reader.

But today, it's all about the Nook.  Here is a comparison chart of the two Nook models.  After reading this, head over to BN if the Nook has been the reader at the right price for you. 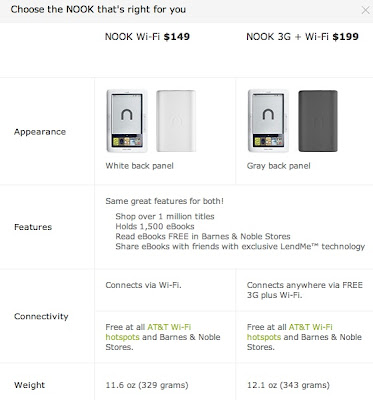 More at BN's Nook page and Amazon's Kindle page (amazon offers two models of the Kindle based on screen size).

Note:  The link for BN.com is just that a link.  I am merely a mobile fan in this matter.  The Kindle link does have an association link where if you click on it and buy something from Amazon, I will make a couple of bucks.  I just want to let you know that.  You know, full disclosure and all.
Amazon Apple BN ipad kindle mobile nook tablet wireless