CES: Day One Goes To Asus And Transformer Tablet, Uh-Oh For PC Makers

Yesterday, I wrote about what chances are HP and Dell have of taking the top spots in the tablet and smartphone markets. Well, let me focus on the tablet market. And I don't think their chances are great.

Asus showed me that by trying a little, PC guys can show off some great stuff. And of four of Asus' tablets today, the Transformer really has me excited. Forget about the Slider or Memo, the Transformer is really a tablet with a detachable screen running Tegra 2 and 16 hours of battery life. On, it's also a 10" screen with 1280x800 resolution. 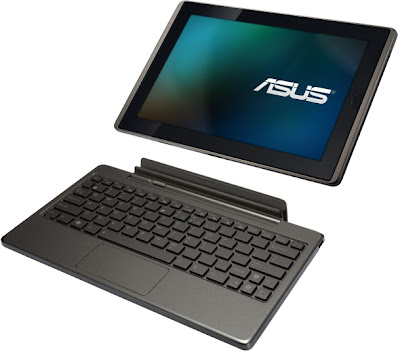 Now, to recap, HP has Web OS and it has announced a special event in February. I will hold off making a judgement about HP until then.

However, Dell could be in a world of hurt. From what I see today of tablets running Windows 7, I don't want to be anyone, trying to pay his rent,who depends on Microsoft help you sell tablets. You get my drift.

Now, PCs are not going anywhere but tablets will begin to take a bigger slice each year from personal computer dollars. And that's not good for traditional beige box makers.
at January 04, 2011