Laptops Running Off Battery For 24 Hours Coming in 2013

I usually hate to share posts on tech that we may or may not see.  But when it comes to Intel, you can almost bet that it'll happen.  Plus, in the mobile chip business, you better deliver or else, the other guys will.  And by 2013, Intel will have chips that run faster than today's chips but consume 20X less power than anything we've got today. 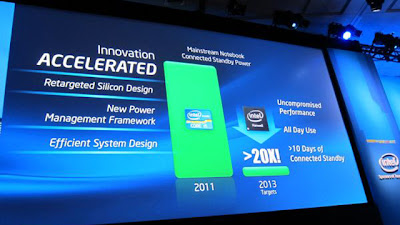 This new chip will be based on the Haswell archiecture.
It can run for 24 hours with a standby time of 10 days (Apple's Intel-based Macbook Airs can run from 5-7 hours with a 30-day standby time). Such a laptop can run off a battery that should last, again, 24 hours (I just love saying that over and over again) or off a solar cell.  Much like what those solar powered calculators that you can buy at Office Depot or Staples for like five bucks.

Again, I repeat.  The 2013 Haswell mobile chips will run faster than today's mobile chips in our laptops while consuming just enough power that ambient light can power it.  Now, it's not to say that the LCD screen isn't going to be an issue.  And who knows, maybe we'll have ever more efficient LED screens 24-30 months from now.

Now, I've done some checking.  Many other sites are reporting the same thing but I wonder if Intel is talking about the standby time requiring 20X less power drain or the actual operation of the CPU.  Then again, does that matter.

Standby time aside, this we know:  laptops that run all day long, provided that you can keep up and may even be able to get its power from the sunlight seeping through the window, light from my IKEA solar lamp, or just the ambient light generated by the bulbs lighting things up in my office.