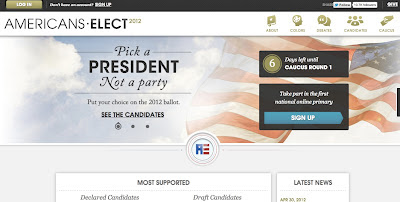 Americans Select is a group that I've talked about briefly in the past.  So far, it's social media push has not been as extensive as I like.  I simply have not seen it trending in the way crying babies have on Youtube.  However, they are getting more mainstream media attention like The Daily Beast.  A quick search also shows there is a lot of interest in it.  And why now?  Our two-party system isn't working out the way we Americans like anymore.  And this model isn't just for Americans but for any other people around the world who wants more control who they select to lead their governments.

Americans Select will hold its first Internet Primary in less than a week.  We will be able to choose who we want to run as a third party candidate, as alternatives to President Barack Obama of the Democratic Party and Governor Mitt Romney of the Republican Party.

Forget whether you think the Americans Select candidate really have a shot at winning the White House or not.  This is a huge departure from the party-centric nomination processes that has dominated by special interests that have veered more and more to the extremes.

According to Washington Post, the group is half way through the process of getting its candidates on the ballots of all 50 states.

Perhaps, I am being too optimistic but America is where the impossible happens.  And picking up an application to run of political office is one of the easiest things to do in the United States.  Okay, running to becoming the next POTUS is degrees much more difficult but Americans are frustrated.

The Daily Beast post is an interview with Peter Ackerman, founder of Americans Select.  He's tired of Washington's dysfunction and he wants someone who is going to be able to speak for the vast major of Americans who want common sense solutions to solve our nation's problems.

Ackerman called Americans Select not a party but a "second process" that gives the people more control over they want in the White House and break the anticompetitive barriers erected by the two parties over decades.  In early American politics, a strong third party candidate was a very common thing.

Of course, getting on the ballots of all 50 states is the easy part.  The biggest fear for potential candidates and supporters of Americans Select is the two-party system.  They fear the awesome power they've amassed for more than a century.

Still, the momentum is on the side of those who are tired of the grid-lock and obstructionist politics the Democrats and Republicans are practicing.

So, if Facebook and Twitter can start and finish revolutions in North Africa, there is no reason why it cannot effect true political change in the United States.