Nexus 7 Review From The Verge


Thanks to Dave the Mobile Warrior for the link to The Verge review of the Nexus 7.

Is there really anything that needs to be said about this?  Google has a good thing going here even if they won't be making money on the hardware.  However, they'll have a strong foothold in the tablet market and force competitors back to the drawing board on redesigning the hardware, the OS (both for Apple, Amazon, and Microsoft), and as well as the marketing and pricing.

My main concern about the Nexus 7 is the battery life and from what I can gather, it's not better or worse than any other tablets of this size.  I actually thought the Tegra 3's power saving feature would give the Nexus  7 a leg up but I reckon the various operations like trying to make sure the UI stays fluid negates that.

Other than that, there are no concerns.  This is definitely the 7" tablet to for other companies to beat or at least live up to.  I think Google will likely release their own 10" Nexus as well in about a year to compete with the iPad.  I expect also competitive pricing as well that end. 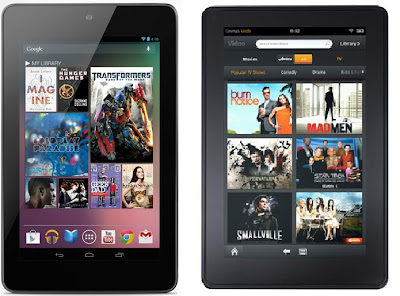 The Verge had some concerns about it - none of them are deal breakers for me.  If anything, my issue is with the bezel and how huge they look.  And it does look a lot like the Kindle Fire.