WWDC: Confirmed - iOS 6 To Highlight, What To Expect


Cnet and macstories have pics showing iOS 6 banners being put up for Monday's keynote address by Apple's execs. 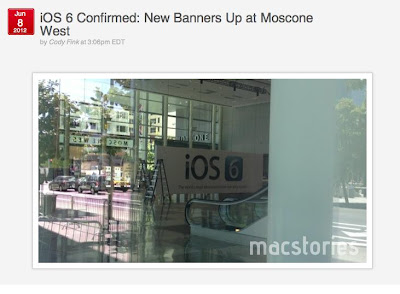 What will Apple unveiling?  There's a lot of chatters/rumors/speculations as to what Apple will offer iPhone, iPad, and iPod touch users.  New features like Apple's own mapping app is often speculated about as is the possibility of a link up with Facebook, finally.

A couple of things to watch out for.  How will Apple address app screen resolutions if the iPhone gets a new screen size and resolutions?  At the same time, will there be features that Apple won't talk about that it might hold off until October when the new iPhone is expected?

Also, Tim Cook offered very little on Siri other than that there is much that it can do.  When will we hear more about that?  Monday or in October?

More at macstories and cnet.