Okay, keep in mind that this ain't the USS Enterprise A-F, the starship, but this is damn well better because it's real. The Virgin Galactic SpaceShipTwo will soon take flight and go into space with tourists on board. 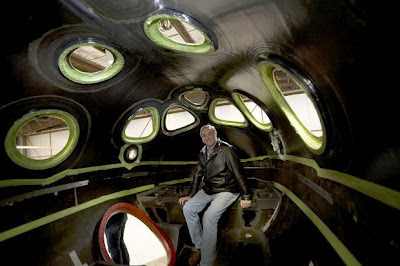 Like I said, it's quite spartan and doesn't have the luxury that we have come to know about in Starfleet ships or any one from a science fiction show but this thing is ready to go.  For $200K USD, you've got yourself a seat. And this is much cheaper than the $20 million or so that many billionaires have paid the Russians for.

Virgin has a pretty neat page explaining the technology and how it kinda works for us laymen.  While I don't have to money to go on one of these maiden voyages, maybe in a few years, the cost to operate these ships will come down so much that we'll be able to afford it.

SpaceShipTwo will be able to get up to 68 miles into space while carrying a crew of 8, two pilots and six passengers so there won't be in-flight anything like peanuts.  Keep in mind that it isn't going to be up there all on its own.  It'll have a mothership to carry it up there before using own rocket to get up there.

Now, for some video.