What's After Nexus 7? Nexus 10? Probably But Google Should Go With Nexus 5


I know that the next logical step for Google to do is to release a 10” tablet to stage an assault on the iPad.  Forget it.  Sure, I definitely think Google should do that eventually but let its hardware partners have that piece of the pie for now.

Rather, I think Google should go small.  As in a 5” tablet.  Yup.  Go after the mobile gaming in a big way.  Go after a segment of the market that I think will explode in the latter part of this decade.  Launch the Nexus 5 with a high resolution screen, efficiently long battery life, and with LTE/3G wireless access for $150 or even less.

Here’s why.  Voice is dead.  Ask Verizon why they’re giving away texting and voice calling and, instead, is charging customers for data.

I like what Apple has done in the last few years with the iPod touch but it doesn’t seem like they’re doing much innovation with the touch other than give it “hand me down” tech from the iPhone that is typically a general or two behind.  And Samsung seems to be playing the same game as Apple with the underpowered Galaxy Player.

This has given Google/Motorola an opening that I think will allow the search giant to undercut its competitors.  All of them:  Amazon, Apple, and Microsoft.

They can make a huge wave through gaming, reading, and entertainment.  And obviously, the Galaxy Note has proven that there is a huge market for just such a device. I am beginning to see more and more Notes out in the wild.  Folks like it.  If I could afford it, I’d like it as well.

The Nexus 5 will be a tablet.  Let’s not fuddle with the wording or try to categorize it. In Star Trek, there were similarly sized looking devices that get passed around, thrown around, and was just in about other shot in the shows.  If you look at the ease with how the actors are able to handle it than the larger versions, you probably think there is real world (ours) uses and demands for this. 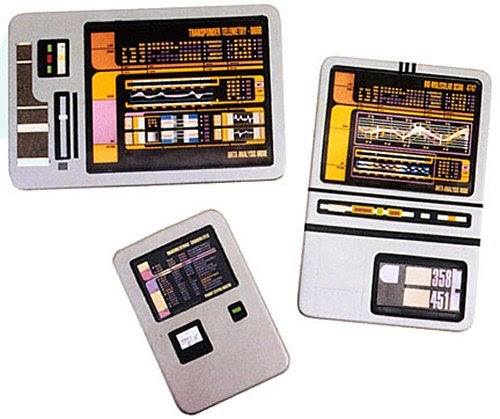 How likely will this happen?  I think very likely but I don’t’ know if Google will have the foresight to go this route.  The tech giants are too shocked at the ease with which the iPad has so thoroughly dominated the tablet market.

I think the fact Samsung’s 10” tablets had difficult time going up against the iPad is the reason why the Note exists today.  There is a lesson in that and I hope Google will heed it.