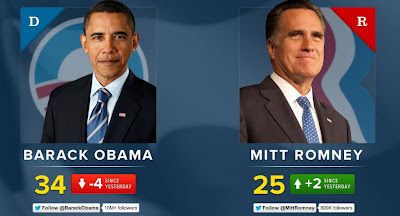 Twitter thinks it can predict the election.  It isn't saying it quite like that but I think that’s what they want to say with their new election index based on tweets from its users.  I think it’s cool if the sampling truly reflect the population of the electorate that is likely to go out and vote on November 6th.  But I doubt it.

Essentially, the number index given to each candidate, President Obama or Governor Romney, reflect the percentage of positive tweets about them of all tweets.

Twitter didn’t just come out with this on their their own, obviously.  They teamed up with some research firms to develop the index.  According to Twitter, they numbers for the index could be more accurate than poll numbers.

Twitter pointed out that while the index and Gallup’s numbers were close, the index could better reflect a change in mood towards a candidate faster than polling samples. The example they provided was that after getting rid of Osama Bin Laden, the Twitter index changed to show usersmoved on to economic issues that resulted a drop in President Obama’s indext number while poll numbers were slower to reflect a drop in the President’s ratings.

It’ll be interesting on November 6th if Twitter’s election index is right or not.

The implications of this goes beyond just elections.  Brands, policies, celebrities, and anything that depend on public opinions could greatly benefit from this if Twitter can get this right.  It'll be a source of revenue and allows Twitter act as a collective brain that could not only reflect the public but possibly shape everything that affects our lives from government policies to what reality TV celebrities we hate the most.