Evil Facebook Has New Scheme, If Catches On, Could Be A Huge Money Maker 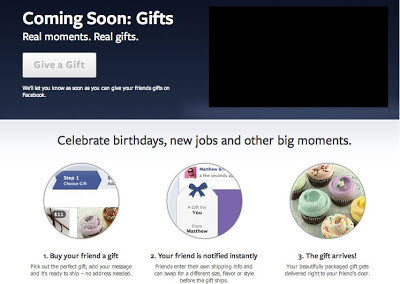 I think Facebook is the Devil. Wth a capital “D”.  Yeah, the big guy.  I think even Mark Z (as in zombie) can’t control it because, let’s face it, Facebook is a huge social network that no one, not even Google+, can ever come close.

And while I’ve done my best to spread the privacy violations about Facebook and how its doing everything it can to erode the notion of privacy, it does have its appeals.

And yes, I’ve been quite happy to see its stock price so beaten down from its IPO price.  More than that, it’s vastly overpriced.  It makes very little amount of money when it does.  However, I’ve noted something about Facebook Gifts that could really take off in ways only the most optimistic Facebook execs can hope for.

See, with gift giving, Facebook has made it easy for friends to send each other, well, gifts for any occasion.  Birthdays, Christmases, or any other holidays. And they’ve made it very easy.  On top of that, because they know so much about each user, they can make gift giving not only easy, but also in ways that is useful to the giver as well as the recipient.

I’ve noticed that many of my friends “liked” Target.  Makes sense for me to send them Target gift cards than a trip for two to the middle of nowhere to play miniature golf.  I think Facebook ought to go further if they’re going to be using user data and mine it for commerce.

It could be huge if they partner with retailers like Walmart, Target, or Amazon in big ways. Allow merchandise to appear in a special section of the Timeline that could entice  users to buy gifts for others or themselves.

I still think Facebook is evil.  I’m sadden that there isn’t more uproar about it more often.  Still, I have to give credit where credit is due.  Gifts could be its ticket to being profitable if this catches on.  I want to say it like it's a big "if" but there is no telling what people are comfortable with.

Personally, I am never giving Facebook any of my financial details and I don't think you should either.

As I come to the end, I just wanna share what I found out when I searched "#facebookgifts" on Twitter.  Most folks are "meh" about it. Brookstone seems happy with how things are working out.  We'll have to give it more time to see what Facebook's other partners think about this.

I reckon a wishlist from Facebook for users would not be too far behind.