I think this has got to be a first.  The Israeli Defense Force used Twitter to sell folks that they've launched a new campaign to rid themselves of folks who fired rockets and missiles at Israel.  Which ever side you come down on, this is probably a first for Twitter. 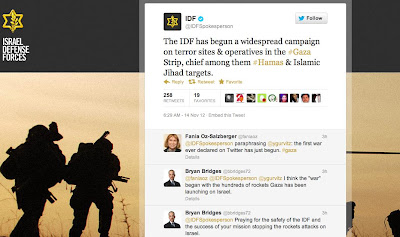 Twitter has been used telling folks that they're on the toilet, birth of a child, link to an interesting post, or even start revolutions across North Africa.  But a war?