Redbox Instant – How To Sign Up And Who Best To Revolutionize TV? 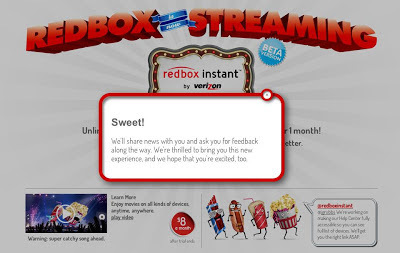 I think the best company on Earth that can upend the cable companies and the way television is being watched right now isn’t Apple.  Yeah, I think you’re surprised this.  And no.  It’s not Netflix.  And not Redbox along with Verizon.

And certainly not Amazon.

It’s Google.  I think Google is the best company in the world that can make this happen.  Think about it.  They’ve got the infrastructure and they’re laying ground world for very, very fast Internet.  Why have ultra-fast Internet connection if not for video.  Yeah, on top of that, they’ve got the will to make it happen.

Unfortunately for us, they lack someone who can make the right deals.  Not even Steve Jobs managed to do it.  But if Google can find that right guy to charm the studios and other media companies into giving Google a shot, wow.

Until then, there’s Netflix and Amazon.  Now on to Redbox.  Here is the link for you to go to Redbox Instant to sign up for a private beta.  And yes, I signed up first before I let this out to you.  I don’t want the competition.