Rand Paul filibustered President Obarack Obama's nominee for the CIA, John Brennan.  He did it for 13 hours and the White House could have stood its ground and out of amusement see how long Senator Rand Paul could have kept it up. 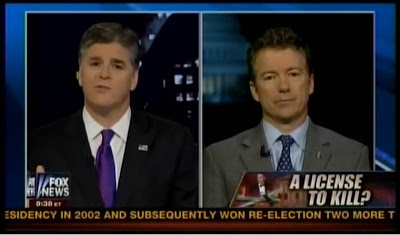 But it didn't matter.  Both the senator from Kentucky and the Democratic Party got what they wanted. The filibuster ended after Attorney General Eric Holder submitted a letter saying the president does not have authority to use a drone to blow to bits an American not engaged in a terrorist act.

Rand Paul identifies with the Tea Party element of the Republican party.  They're the most vocal and engaging of the conservatives.  And they play a big role in primaries, which is why the establishment Republicans are having such a tough time these days.  And whole Ron Paul has not had any luck with his presidential aspirations, his son Rand has been mentioned frequently as a possible candidate.

Standing up to Obama certain gave Paul some street creds.  But getting the White House to cave?  That’s priceless.

And the White House certainly was willing to oblige if it meant Vice President Joe Biden or former First Lady, former NY senator, former SECSTATE will run against a Tea Party candidate in 2016.

Believe me.  Rand Paul would be labeled as a Tea Party candidate, not a Republican candidate.  For this reason, establishment guys like Jeb Bush and Chris Christie will be pressured to run.  And even if Paul doesn’t win the GOP nomination, he’ll likely push the whole field further to the right.