The Future Of Reality Shows Is Social Media - Starring You!

Would you bet against me if I told you that I have never seen an episode of reality television show from start to end?  Not Survivor.  Not Amazing Race.  Not any of the cooking shows or crazy housewives (maybe if there was one about crazy wild housewives...hmmm...).

Well, if you did, you lose.  Honest.  I don't get sitting there watching people talking about their lives or doing something stupid to each other.  Having said that, I have seen clips here and there from Youtube and links from friends to know that I have been right all these years not to waste my time on these shows.

However, I think things are about to get more interesting for reality shows.  And they're going to migrate from network to social media or social apps.  Take this yy.com site from China that started off as a chat room site for gamers until people started using them to broadcast themselves to millions of Chinese viewers. 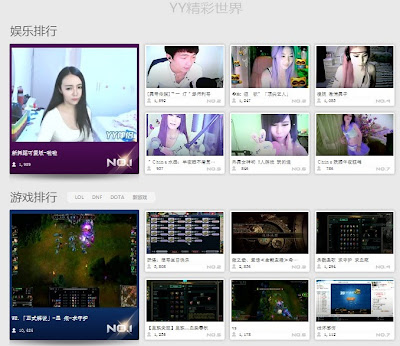 I'm betting that someone has already created something like this in the US or for the Western world.  Though not necessarily live, Youtube is already a platform for self-promotion - fashion, cooking, DIY, tech, etc. Heck, I had thought of doing something regarding social and tech myself.

The New Yorker did a feature on this new social phenomenon by talking about a purple hair girl name DanDan.  And all she does is perform for viewers online.  Singing.  Chatting with them.  And in return, viewers show their appreciate by showing her with virtual gifts.  Virtual gifts that cost real money.  And YY.com sells these virtual gifts.

And the performers or these social media personalities get a cut.  A couple have earned around 50K a year?
There's more in the post that I don't want to summarize because it's worth ready.  Especially about how DanDan managed to get guys to give her "roses" and how these audience is truly regarded by the online media.

All I know is that this is going to be huge.  Frankly, I'm surprised this has not taken off here or in Japan where pop stars, called idols, are worshiped.
at September 06, 2013