Not Surprised: Never Doubted For A Moment That the NSA Has Its Hands In Google Or Yahoo's Data Cookie Jars, So What?

Today, there are a bunch of posts regarding new Snowden docs obtained illegally that suggested the NSA has tapped data centers belonging to Google and Yahoo.  I'm surprised that people are surprised by this new revelation.  And what's more, I figure more companies are involved whether they knowingly had their data centers tapped or not. I didn't see Microsoft's name anywhere and you can get they're in bed with the government more than any other companies. 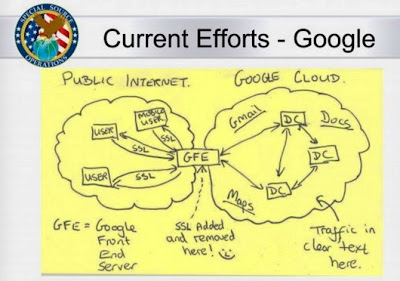 The Washington Post has a pretty good write-up on this.  What I found annoying about the post is that reporters claimed they don't understand why the NSA is doing this.  Personally, I think it's pretty clear why.

And as for American or British intelligence apparatuses spying on foreign countries, both friendly and not, I also find it hard to believe that spy agencies of friendly countries did not already know this or did their own parts to facilitate these operations.  Perhaps, it's the NSA and CIA's fault that this is allowed to be public knowledge.  But it's also likely the faults of these spy agencies for not informing their own heads of state that their calls could be tapped.

In the wake of the revelation that the US has recordings of German chancellor Angela Merkel's personal phone calls, Germany sent their intel chiefs to the US to discuss the matter.  My guess is the public and private

I'm not condoning what the NSA is doing.  I'm very concerned.  But not about what they are doing now but when their turn their attention towards Americans.  Sure, I find the NSA snooping very annoying and am concerned by it but I am more upset with companies that collect our private information to profit off of them.
I'll say this.  If the NSA or CIA starts selling ads on their websites, then I'm taking the gloves off.  Again, not surprised by this.  Imagine what we know now and what else don't know.

So far, we have not seen any direct misuse of the information collected by the NSA or anyone else towards American citizens.  I suppose my worries in this regard is that, one day, domestic spying could become the norm and the information subject to misuse by politicians or government agencies with specific agendas.

The ability to turn these snooping technologies on Americans is there and only requires the word of someone in government to do that.  We already know that NSA analysts already spy on their love ones (Reuters).

There needs to be a discussion about surveillance and public safety.  So far, we're not having it despite all these leaks.  There hasn't really been a great public outcry about this other than how Snowden go away with so much classified information.

And with the American public so willingly give away information to social networks, I'm not so sure the public is going to be all that upset with the NSA "accidentally" collecting metadata, calls, or e-mails of Americans in the name of protecting them.
on October 30, 2013