I've decided to take Sunday off and watching some TV at home and get some work done around the house.  I'm usually watching Netflix (in the middle of bing watching the third season of The Killing) but I had turned on my cable to see what games are on and I stumbled across Aliens. And it's stuck. 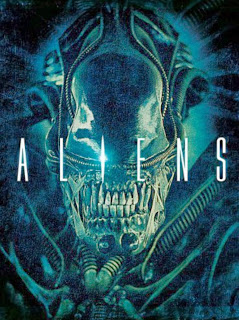 This must have been the sixth or seventh time I've seen the movie.  Each time, I noticed something new.  Something that I missed before.  Maybe there have been different versions on DVD and on television.  And maybe it has to do with the commercial breaks.  But I think it's by far the best of the Aliens movie.

And it's served as basis for many alien or big bad monster movie - a team goes into an unknown situation to investigate an incident or conduct a rescue.  Things go wrong and nearly everyone gets wiped out except for a couple of civilians or scientists.  I mean you usually know going into the movie who is going to get out alive.  It's usually the actor or actress who gets paid the big bucks.

Anyway, it's more about the plot and the character development throughout the movie.  Perhaps it's because this movie was made in the 80s and the characters on the team of marines were more tolerable. And they had the right amount of dialog to add a sense of urgency to the movie.  Essentially, it was just right.

And of course, there's Sigourney Weaver as Ripley who made the movie much more believable. She played along side the team, going with the flow and stepping up at just the right time - whether it's the rescue of the marines in trouble or chiming in at the right time to change the mission a bit.

Then there is also her unwillingness to leave Newt behind. After gone through so much herself, she could sympathize with the little girl. It likely was not a sudden injection of bravery but she felt the little girl had suffered enough being lone on a planet for so long. During one part of the movie where she was tracking down Newt on the sensor and finding only the bracelet and not the girl, she showed just the right amount of pain. But then seemingly waking up to Newt's screen set everything aside and got her going again.

I can't say much of the other movies that followed.  The Aliens versus Predators movies were a decent distraction.  Scifi movie fanboys' collective dreams come true.  However, there was no Schwarzenegger or Weaver to carry the movie.  There was no anger or urgency or the main character losing it and decided enough was enough.

For anyone reading this, I hope this serves as a reminder to get back into Aliens and rewatch the movie.  Maybe even Predator (came out a year after Aliens).  Both movies had the right balance of story and action.  Unlike today's action or science fiction movies that rely more on special effects that sent budgets sky-high, I'm hoping future directors can rely more on the actors (those who can act and carry a movie) and less on special effects and very loud sounds.