Social: I Was Targeted With An Ad On Twitter But That's Okay. Because I Let It

I found this ad on my Twitter feed today that was very interesting.  It was a Hyundai sponsored feed that specifically targeted me.  A Bruin from UCLA. 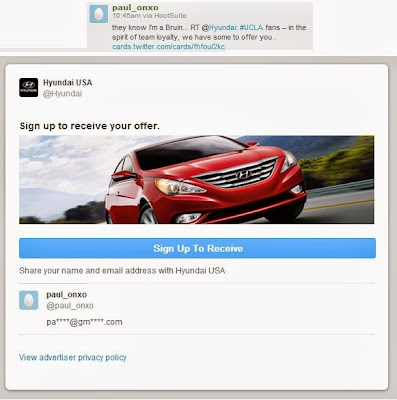 I should be outraged?  Well, I'm not.  Here's why.  I let Twitter target me.  I know that anything I tweet has the potential to be seen by everyone and anyone is free to comment, retweet, or whatever they can do with it on Twitter.  An advertiser will attempt to direct something at me that might be of interest to me.

And that's what Twitter is for.  And it makes sense for this format.  Had this happened with Facebook, that I'd be pretty pissed off.  Their views on privacy and what is private or public is much more skewed.  I can see a scenario in which something I write to can be turned into a "story" and be made public to my friends or anyone else.

Supposed a female Facebook user shared with her close friends and families that she's expecting and tracked where she went to look for maternity or baby gears. Then Facebook turns around and tells her friends that she was interested in specific stores or liked.  That would kind of let the cat out of the bag.

It's why I gave up on Facebook.  And people are not happy about it.  It's why they've had to expand their user base to tweens.  It's why more of the valued youth market are abandoning Facebook for other social apps.
at November 12, 2013