Social: Folks Go To Our Satirists and Comedians For News

Okay, so we know for years that Jon Stewart has had an impact on American society and politics and has been the source of news and information many young minds go to.  Gone are the days when Tom Brokaw and Peter Jennings has us glued to the evening broadcast news for the day's events.  Who has time to sit around the dinner table watching the news when we almost never eat at the same time and have Twitter and other social media to keep up.

But we still find time for The Daily Show, right?  Of course.  And what's amazing is that spin-offs and offshoots of TDS has also skyrocketed to the top as the place where we find out facts about issues should be important to us.

Case in point is the debate over net neutrality.  John Oliver, Steven Colbert, and Jon Stewart dominated over traditional media with Fox News coming in last as the place where people have heard a lot about the future of the Internet and whether the net as we know it will continue or go the way of the dinosaurs and only those who can pay can play. 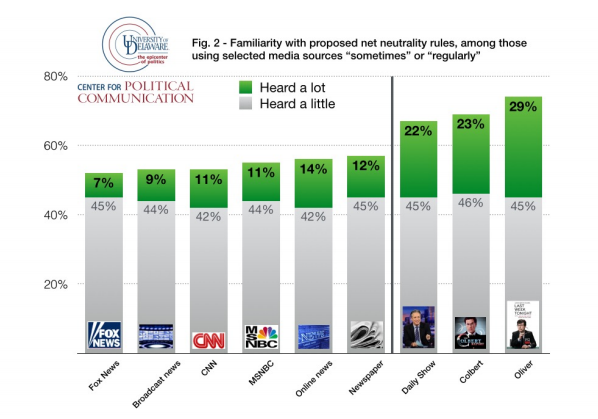 According to The Mary Sue, satirists have at least a 10 point lead over traditional media with newspapers coming the closest at 12% behind TDS's 22% of a survey of people who have heard quite a bit about the issue.  Fox News came in at 7%.

Interestingly, if you look at the ranking, maybe there is a certain slant of the political views of the news (or comedy) organizations - net neutrality being a more important issue to liberals and democrats than conservatives, libertarians, and Republicans.  Perhaps, this alone says a lot about biases in the media as well.

Here is a video clip on net neutrality from Last Week Tonight with John Oliver.