August 15, 2015
Source:  Inquisitr.
While I do believe that there are advanced alien civilizations, past and present, I don't think the photo NASA released from the rover, Curiosity, showed anything resembling a Martian sculpture of an alien head, headstone, or grave. 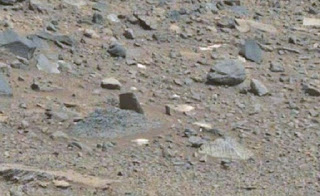 First, my own disclosure. Like I said above, yes, I believe as much as Fox Mulder but I don't think aliens visit us on a regular basis dating back tens of thousands of years. However, I'm not saying that there are no evidence pointing to the existence of extraterrestrials or even an occasional encounter. There are just UFO, unidentified flushing things, that the government has no explanation for but is concerned about.
Now, I do believe that a multi-decade long plan for disclosure, maybe over a couple of generations, is taking place. Maybe in the next decade, a future president will speak not only to the American people but the citizens of the world that humanity shares this universe with others.
There will be others like the Catholic Church that will be informed ahead of time to enact their own disclosure plans. The Church will, of course, remind the faithful that just because there are aliens does not mean God does not exist and that they are just as much God's creation as we are.
Anyway, you get what I'm trying to say. Maybe like the Inquisitr post suggests, this photo was purposefully allowed to leak into the public as a part of the disclosure plan.
But more likely, that sculpture is just another Martian rock that Ufologists decided to make special.
So, yes on existence of aliens. Yes on a disclosure plan. No to the alien grave in the above Curiosity photo.
We will get more pictures from Mars, Pluto, or the International Space Station that cast lights or shadows in ways that fit our narrative whatever they are. Maybe it will end up being the real thing. I think it's fun to speculate and discuss the UFO issue but we also want to call it for what it is when the time comes.
Frankly, it is just unlikely sophisticated multicellular species managed to climb out of the ancient Martian ocean given the short timeframe and hostile conditions. So, a definite no to a long dead alien civilization on Mars.