Comic Book Futures Are Always So Bleak: What If It Was?

Spoilers regarding The Flash on WB. You've been warned.

X-Men. Batman. And now, the Flash on WB. In season 3, the Flash goes into the future to find out who Savitar is so he can take that information back to 2017 and use that to defeat the god of speed. Once he got there, he saw just how the dead of his love and wife, Iris West Allen, affected his future self and Team Flash. 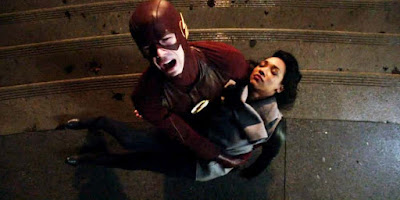 If you keep up with the comic books, it always seem like the future is bleak for our hero's and humanity in general. Apocalypse. Dystopia. Earth somehow with less warmth while the environment is totally destroyed by our own foolishness and wars. The protectors were all broken and some still fight but don't really see the point other than to fight because that is all that they have left.

What if the future did not have to turn out this way? I'm still working through the Flash series but what if the future is made more bright somehow by a sacrifice or a tragedy visited upon our hero and the team.

Books with a dystopian future makes stories more compelling and gives the readers something to hope for, that by the end of the book, things will be set right. It is the struggle against the greatest odds anyone can possibly face that readers flock to and hope to see a little bit of the hero in themselves.

What if Barry Allen's loss somehow secured a better future? I think that would made a more compelling story that is more true to what life is like today. People die all the time and, yet, some of us continue to live and remain hopeful through our actions to live and try to do better. Try to be better. And that and other acts help to build a bright future.

If the Barry Allen took the greatest loss in his life and he and his friends doubled down on trying to fight crime and ended up building a better future than if Iris had not died.

Of course, knowing this, it would be interesting to explore whether Barry Allen would allow time to take its course and have it cut short his time with his wife. Save his wife and maybe end up with a bleak future or allow his wife to die but that would mean a better future for humanity? It would be interesting to see a battle inside Team Flash deciding how Team Flash deals with the tragedy and rebuilds itself.

Note: The Flash isn't real and it is a television show. So, in the end, Barry Allen and the audience gets to end up with just about everything they want: Iris lives and a future to look forward to. There is no need for a spoiler warning, right?
on April 26, 2018