Trump has many, many friends in the Congress.  Most if not all of them are Republicans.  So, news today that Facebook has banned Donald Trump, president of the United States for eleven more days, is not going to sit well with some of his devotees, especially those who are looking to become the heir apparent of the MAGA movement.  However, the move by Facebook has impressed me even though I am not a fan of Facebook or its CEO (I am no longer a Facebook user).  Twitter only banned Trump for 12 hours. 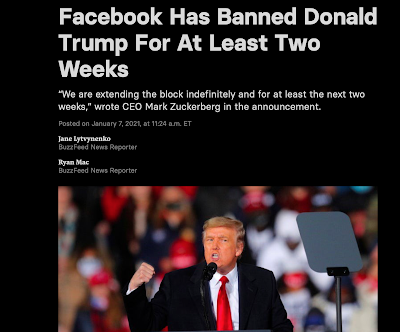 A few things are going to be predictable in the short-term.  Many Trump fans, First Amendment advocates, and right wing groups will denounce the move by Facebook.  They will threaten (which will get a few of them banned as well), they will vent, and they will consider other options.  But really, what other options are there at this time for conspiracy traffickers and MAGA supporters?

Over the long term, expect congressional hearings about the power of Big Tech and Trump advocates to continue to grind their axes against what they perceived as censorship against conservatives.  Most of it will be done as red meat for right wing, primary, and fringe supporters.  Just as he did during the last hearing, expect Matt Gaetz (who I think secretly dream of being Matt Trump) to berate Facebook and Twitter at future hearings without really asking any questions that is relevant to privacy or the impact of social media and regulation of social media.

For Facebook's CEO, Mark Zuckerberg, the decision to ban Trump was clear.  Trump was attempting to stage a coup and encourage violence rather than condemn it and tell his supporters to back off.  Furthermore, Trump continues to lie about the fact that he did not win the election because it was stolen from him by frauds (which was largely rejected by the FBI, DOJ, his own attorney general, and state Republican officials). 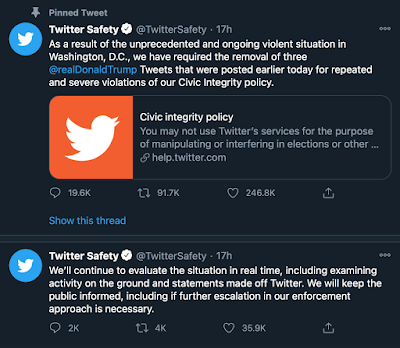 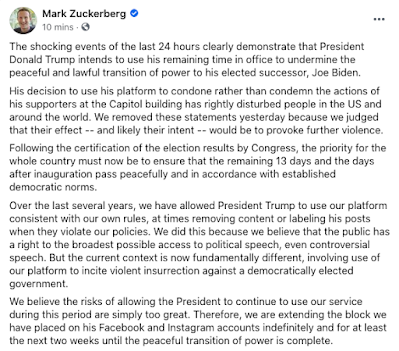 It's likely Facebook will allow Trump back on the platform.  He is a draw and source of revenue after all.  Twitter has already let Trump back since it's past the 12 hour ban.  It will be interesting to see what kind of impact these bans and pushbacks against Trump by members of his own party will have on his future social media updates.  So far, Trump has not said anything on Twitter. 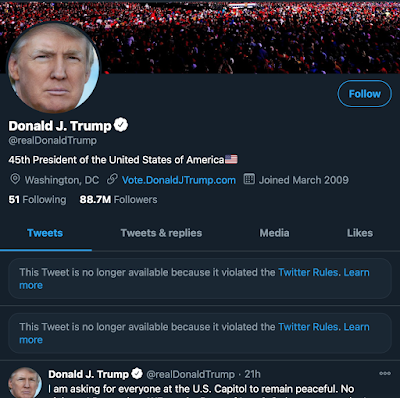 Note: I just want to note that I'm not a fan of Donald Trump as a person.  But I'm also appalled by his conduct as president of the United States.  Regardless of whether it is a Republican, Democrat, conservative, liberal, or a moderate, I'm going to go write things as I see it if I think the person's conduct is wrong or does not have the public's best interests at heart.