I've been an Apple Watch user stating with the 2nd generation.  It is Apple's first mobile device that I did not jump on right away - I was an enthusiastic user of the original iPhone and iPad.  For some reason, it just was not for me.  And the second generation was not for me but I got it as a gift.  Before that, I was a Fitbit user if not a happy Fitbit user.  But I decided to give Apple Watch 3 a go and I'm now a believer.  It is largely due to the more mature apps, especially the fitness app and features.  It has been a while since Apple has made changes to the rings of goals and I'm hoping Apple will do that soon.

I look at the Fitness app on the Watch every day that I have the watch on my wrist.  And probably a few dozen times a day to see where I am.  It's great.  I am comfortable setting my goals at 700 calories, 30 minutes of workout, and getting up 12 times a day.  It took a while for me to decide this is what works for me - it is achievable, it makes me work for it, and it also makes me struggle a bit especially at the end of the day when I am still coming up short.  But there are two additions I like Apple to add to this. 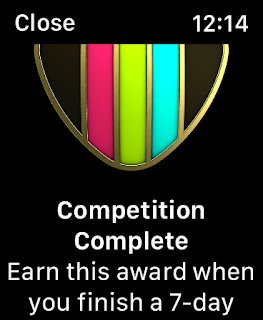 I like another ring to be added.  And this ring can be set by the user.  Certainly, there is enough room on the watch for Apple's developers to add another ring.  Even two. 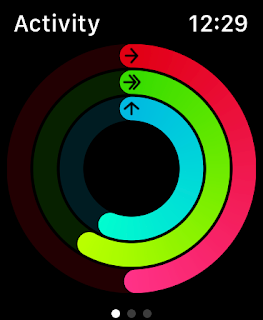 See that middle of black space within the blue ring?  That nothingness?  Apple can certainly make the rings thinner for another ring and a features to fill out the middle.  Maybe like solid circle that fills up as the user gets closer to that goal.

Perhaps, the number of stairs per day is a worthy goal to pursue.  Hours of sleep, ounces of water intake, minutes of mediation, or workouts.  These are just some that I easily thought of that I think many users would be interested in. And smarter readers like yourself could certainly think of other things that I have not considered as goals that would be of interest to users should Apple ever allow users to determine goals for additional rings.

One other thing about the Apple Watch I like is the ability to challenge other users.  Here are some thoughts about this I would like to see Apple implement.  A couple of weeks ago, I was challenged by someone.  And what Apple used to determine the winner is the how many percentage points is earned by the user at the end of seven days.

We are still in the infancy of the wearable revolution and Apple will likely evolve and update the Apple watch fitness app with more features with each passing year.  I think all the features I would like to see are really low hanging fruits that Apple can easily implement.  And perhaps, Apple has other features in store that will blow away any of these features I want. Either way, I would not want to miss this boat with each watch and WatchOS update.