Twitter has been a tear lately with some new features and one of the most important one which could really be a breakout for Twitter is its version of communities to compete with Facebook and Reddit. As with anything social media these days, it could be useful or toxic like the spread of false information regarding election fraud or COVID vaccines. Twitter seems to have a good approach from what they are saying and what is on paper. It has to be a positive force for good, not simply better than Facebook. 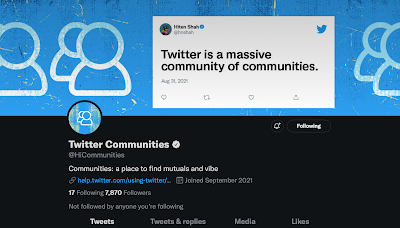 Twitter is about making money for itself and creating value for shareholders. Twitter is now profitable and its stock has gone up a lot in the last year. Compared to Facebook, it is no where near where Facebook's profit and valuation is. So, Twitter has been trying a lot of new features in the last few years that can retain and engage users and encourage them to come back regularly rather than occasionally checking on their timelines.  That has been Twitter's problem.

imagine an alternate timeline where everyone just gets you

say hi to Communities—the place to connect with people who Tweet like you. testing now on iOS and web, Android soon! pic.twitter.com/TJdKwUa4D2

With Communities, it might have a winner.  Twitter seemed to have learned from the mistakes others have made and decided to go at it slowly. It is offering Communities on an invitation-only basis for now and will have qualified moderators. It is also rolling it out at a slower paces to work out any issues or bugs.

And a slower pace that allows Twitter to do something important that Facebook and other communities have failed to do: others have allowed their communities to go unchecked and become havens for hate, conspiracy theories, and other harmful social platforms. This is not an issue about free speech. Political communities are probably going to be allowed on Twitter across the political spectrum - conservatives, liberals, or moderates. However, extremism must not be allowed to breed and foster on Twitter. Otherwise, Twitter Communities would be no different from from Facebook.

Also, Twitter needs to letting its communities turn into echo chambers and that rules are applied evenly across the board and respect the privacy of users.

Personally, I'm rooting for Twitter to flourish and be a real factor in the social media realm and I'm looking forward to trying Communities out.