Work From Anywhere: Mac or PC

During the work from home period of the pandemic last year, I had been using my personal MacBook from 2016 as my primary computing machine for work. Since returning to work in the office this June, I had been given a Windows laptop with an i7 chip, which I assume is at least towards the high end of the speed spectrum, with 16 GB of memory.  From my experience, if I was given a choice of a new Macbook with M1 or the Windows laptop, I think I would rather go with the MacBook.

The Windows laptop I was given was an HP laptop with a much bigger screen than my 12” MacBook. There were many advances in laptop technology in the last 5 years and the HP is faster with most operations. It had the advantage of a faster Intel ship, native software from Microsoft, and 16 GB of RAM to my 8 GB on the MacBook.  Plus, my Macbook was barely above 1 GHz. 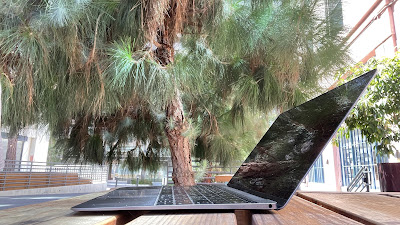 So, my new Windows HP laptop is a monster, right?  Fearlessly chewing up Excel sheets while allowing me to open about 10 tabs on the default Microsoft browser, Edge, and playing a Youtube video of someone who recently visited Universal Studios, the real one in California, for Halloween without breaking a sweet.
Well, maybe. Maybe not. I could not really tell. See, while it did all that, I also was able to do the same on the Macbook with only 8 GB and an aging CPU vs 16 GB on the latest Intel chip. The Windows laptop was faster with a very large Excel file but I was still able to walk away, make coffee and get a snack and enjoy it before it was finished. With the MacBook, I had time to go for a run and come back and it would be finished. However, with the recent updates from Apple and Microsoft, the same Excel file was also faster on the MacBook as well.
And that same file on a Surface laptop? 16BG and whatever the high end option we could get from earlier in the year seemed to have to labor through those calculations. I think it is faster than my MacBook. I think.
So, I can see why companies that invest in getting Macs for its employees have a better return in the long run than those who go with the traditional Windows option. And this is just a small company I work for.  For enterprises with hundreds if not thousands of companies, they stand to save over $800 per user (see link above) over three years by going with a Mac because it needed less support and had a longer uptime without having to worry about the usual issues that come with machines running Windows.
Furthermore, the Forrester report finds that companies with Macs tend to have a higher worker retention as well as increase productivity. What if you are a small company with only a hand full of employees or going solo?
I still think the Mac is the way to go - the MacBook Air with M1 seems to be designed just for that. It has everything you need right out of the box - Safari for Internet access, Mail for emailing, and Apple’s suite of productivity apps, while far from perfect, are good alternatives to Microsoft Office. Furthermore, the computing environment we have today are nothing like those of the late-90s and the 2000s when even if companies want to deploy Macs, they could not because many applications were Windows only. Today, there is virtually a native Mac version of the top applications. On top of that, many applications can now be accessed through a browser.
And let’s not forget about the native security features of the MacOS. As far as I know, there has not been a major ransomware hack of a company or government agency running Macs (I do not think there is a government agency in the world that operates with mostly Macs). (See Macworld UK). There are Trojan horses rather than traditional Windows viruses that require the user to do a few things like disabling security measures Apple have in place that keep them at bay.
On the Windows side, if you’re mostly safe if you do not venture into the bad neighborhoods if you get my meaning.  Even then, there are things that could go wrong. And with hundreds if not thousands of employees, the risk is amplified when running Windows vs Mac. I keep to myself. I run whatever my work laptop is for. I have my iPad or iPhone with me when I need to do stuff that are not work related. I watch YouTube videos and that’s as far as I go with the work computer. And even then, I sometimes wonder if something has snuck in and running in the background without me knowing it just because it’s a Windows laptop.
I don’t have the same concern on a Mac.
at October 06, 2021