iPhone 4 Possible on T-Mobile? Need Someone With Tech Understanding To Clear This Up

Is it possible for the iPhone 4 to get 3G speed on T-Mobile's network? We'll need someone with technical or expert engineering skillz on this one.

Towards the end of the WWDC 2010 keynote today, I kept hoping Steve Jobs would tell us about this "one more thing" in stored for us. That one more thing being that the iPhone 4 is coming to all the other networks in the US. At the very least, given that T-Mobile uses GSM as does ATT and my current network, I had hope that to be the case.

No go. The disappointment was not as acute as the Lakers loss last night but it weighed in me a bit into the afternoon. So this is what I tweeted:

iPhone: no iPhone for T-Mobile...sniff, sniff, sniff...AT&T, guess I'm gonna have to be your bitch...

T-Mobile tweeted me back about myTouch Slide. Right. iPhone 4 or myTouch. I am not that stupid.

So I trolled the Internet for more details and I came across an interesting comment about the iPhone 4 and T-Mobile's HSPA+ network. A couple of things happened.

On MacNN, the FCC page for iPhone 4 stated it is now a five-band phone. Penta-band? Anyway, none of the frequency is the 3G frequency used by T-Mobile's 3G network. 1700Mhz.  That's the end of the story, ain't it? Well, maybe not.

And this is where we need someone who knows what ins-and-outs of 3G technology and how everything works.

Over at TAUW, I read a post about the iPhone's new world-phone ability.  It's the exact same topic as the MacNN post except, now, read the 3rd commenter.  An astute observer no doubt who pointed out that the new HPSA+ network currently being deployed by T-Mobile in select markets but will be coming to more than 200 million users uses many of the frequency supported by iPhone 4. 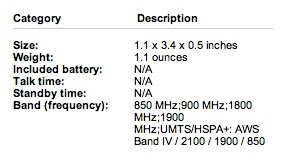 Does this mean anything?  See why I am hoping someone with wireless engineering backgrounds can help us out.

If this is the case, there could be another positive possibility.  That being that the iPad will also run on T-Mobile's HPSA+ network as well.
on June 07, 2010