5.3" Galaxy Note Could Be More Acceptable To Mobile Warriors

The Galaxy Note running Android from Samsung could well be a silent hit in ways that no one expects. And it isn't just the huge screen with dense resolution though I love it. It isn't the stylus though I can see why Samsung included. 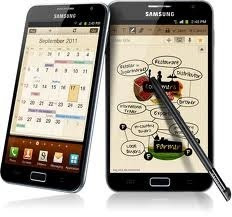 First, we need to figure out what the Note is. Well, is it a smartphone or a tablet? It can barely fit into one's pocket and you look ridiculous holding it up to your head to make a call. And by most definition, the screen, which is a bit bigger than the top end Android devices, is too small for tablet use. At the end of the day, most users will use the Note for productivity rather that using it as a phone. So it is safe to call the Note a tablet that makes phone calls.

More than that, Samsung is on to something. The note is a truly unique productivity pad that is useful across a broad range of disciplines. Students, office workers, mobile salespeople, the law enforcement, etc.

I can really see myself with the Note sitting at Starbucks studying and taking notes or doing a paper.

And if I need to make or take a call, I can simply use the wired or Bluetooth headset.

Go forward a couple of years, the Note may be connected in some manner to those wearable PC or watch that some mobile companies are developing. This will further enhanced a mobile warrior's productivity.

We know that Apple is entirely dedicated to the 3.5" screen on the iPhone and iPod touch and 9.7" on the iPad. Its competitors like Samsung have experimented with different screen sizes in the marketplace.

The Note is one such experiment that has gained momentum in the market. Hopefully, we will see a WiFi only version as well.