Apple God As Spoken: iPad 3 Coming Out Party Next Week

Update:  note that in the invitation, the iPad depicted has no home button...interesting...

Okay, it's official.  Apple will unveil the next iPad update next week, March 7th, in San Francisco.

Really, need not say more.  Anything else will be speculation.  It was rumored a few weeks back that it would be on the 7th and this mornnig, CNBC tweeted as such.  But this invitation to the chosen ones confirmed it.

And yesterday, we also speculated that it is possible that Apple could charge a premium for Retina Display.  I still think it's possible Apple can charge more for it but at the same time, it could also be something Apple puts out just to throw everyone off. 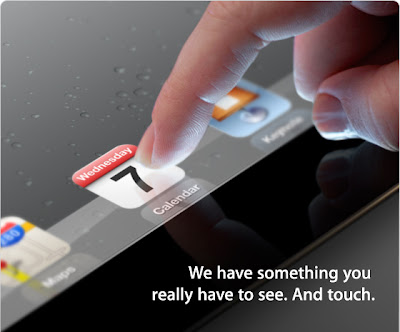 Personally, as an average mobile warrior, I am hoping that Apple will keep things the way they are.  Meaning, $499 for the low-end iPad and up.  Maybe keep the iPad 2 around just to mess with the low-end of the tablet market and Android competitors.

Then the next question is how will we receive our iPads?  Pre-order and have it sent to us like last year or order and pick it up in the store?  I've got my credit card ready and set to go.  However, I'm kinda hoping that Apple will allow us to line up on a Saturday to make the pickup.  I've already organized a breakfast for some close friends that are going to be picking one up.  yes, it better be a Saturday, March 10th or 17th.