Apple is a premium brand.  However, it’s not the same thing as saying that Apple products cost more than competing devices or computers.  Rather, it’s about Apple’s unwillingness to compromise.  The “premiumness” is about Apple’s talented teams of designers, programmers, and engineers making the best products they can.  That is what makes Apple such a sought after brand and why people line up year after year to buy its products.

So, we learn now that Apple’s iPhone is not doing well in countries where carriers do no offer subsidies.  In fact, Android smartphones had take Apple to school when it comes to market-share.  So what?

There are going to be many analysts and tech pundits who will push for Apple to release a cheaper iPhone to address those market.  Screw that.  If Apple could not lower it self to make a PC at the $500 price point that was not a piece of junk, what makes anyone believe that Apple will make a $200 or even a $300 smartphone that not worthy of the name “iPhone”.

The other issue is that Apple wants a certain kind of customer.  Not necessarily affluent ones though that definitely helps the bottom-line.  What Steve Jobs, Tim Cook, and others want are the type of customer who recognizes a product that was developed with the meticulous care that Apple has put into.  And it’ll certainly cost money to buy it but it’ll be worth it.

Furthermore, there are other things at play.  One that quickly comes to mind is the economic factor.  Take a look at this chart.  The iPhone isn’t doing too hot in Greece and Portugal.  If you’re not too up and up on the latest financial market news, here it is:  Greece is on the verge of bankruptcy while Portugal has had their bonds rattled by downgrades and austerity measures are in full play. 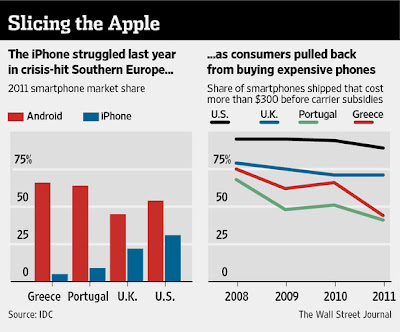 Android devices in general are good enough for the vast majority of the market.  No, not everyone needs the iPhone or even high-end Android device like the Galaxy S II.  A $200-$300 unsubsidized device is good enough.  I know a few big mobile warriors doing just fine in a $300 Android device on Virgin Mobile but I also know that if not for the $25 prepaid plan they’ve got grandfathered in, they would have long jumped ship to an iPhone.

In conclusion, Apple is never going to make a $200 iPhone that is garbage because it’s not in their DNA.  I wouldn’t want Apple to either.  Apple could conceivably lower the price of the iPhone 3GS to $300 someday for economically troubled markets and even the 3GS is still head and shoulders above competing devices in that price range.

The only true measure now is profit.  And I reckon Apple is leading in that department.