Couple of Benchmarks,Speeds And App Sales, That Show Where We Are With Tablets

Here a couple of interesting benchmarks that provide a partial picture of where Google’s Android And Apple’s iDevices.  Obviously, we know that Android dominates the mobile handset market, both domestically and globally.  However, Apple leads in the only category that it has ever cared about: profits. 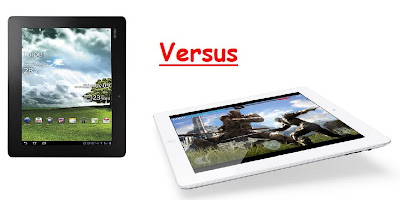 Now, we see just how fast the chips lowering the high-end devices are.  Nvidia’s Tegra 3 is poised to play a big role in the Android market, specifically, the tablet market.  It smokes the A5X chip that drives Apple’s 2012 iPad on certain benchmarks.  So, Apple lied when it say that its chip is faster than the competition?

Well, it appears that Apple took a liberal view of things and was referring only to the graphics element of the chip which is far better than its competitors.  Apple was probably forced to include such a powerful graphics chip because of the Retina Display, which has twice the pixels on the new iPad over last year’s iPad 2, in the new iPad.

I don’t know.  Let’s call that a tie for now.  What's important is the experience. And the Retina Display is awesome. 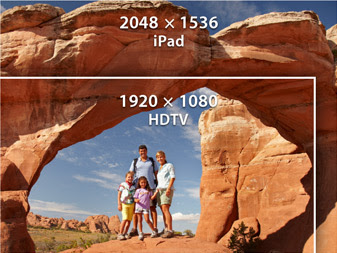 Another benchmark is money as in the revenue generated by its respective app stores.  According to Flurry, for every buck Apple generates, Amazon generates 90 cents while Google’s own app store makes 23 cents.  Good for Apple?  Always but by my own reckoning, it’s even better for Amazon.

After all, Apple sold about fifteen million iPads while Amazon likely sold only around 5 million Kindle Fires.  So it appears that each Fire owner spends  almost three times more on apps than the average iPad owner.  That’s impressive by any measure. 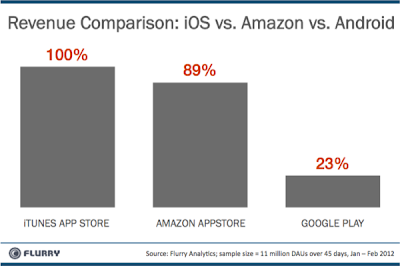 I have no reason to believe that Flurry’s information is skewed in anyway.  I can definitely see a lot of disbelief in the revenue figure.  We’ll see if we hear more about it.

All in all, competition is good for us mobile warriors.